Continuing his remarkably generous donations of Martin / Wright-related items from his late wife's collection, Mark Armesto has given the MHRC a vintage print of Wright's drawing for San Marcos in the Desert. More exciting still is the inscription on the border: 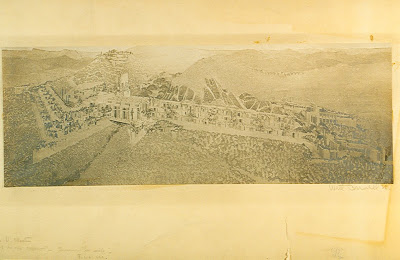 Yes folks, it's clearly inscribed by Wright to his friend and patron, Darwin D. Martin.

This print passed down from Darwin R. Martin to his adopted daughter, Pattie Armesto, Mark's late wife. In 2008 and 2009, Mark has given the MHRC some wonderful artifacts: a framed Japanese print from the Martin House, a copy of Darwin Martin's booklet "The First to Make a Card Ledger," and a silver cup engraved to Darwin Martin upon his retirement from the Larkin Company in 1925.

San Marcos in the Desert was an ambitious but unexecuted design for a resort near Chandler, Arizona (for Dr. Alexander Chandler). Like the Martins' "Blue Sky" mausoleum, this project was doomed by the stock market crash of 1929. Apparently, Wright sent Martin a print of the presentation drawing for San Marcos, and the "in exile" comment in the inscription must be a stoic nod to the hard time that both men knew were upon them.


Posted by EJF at 1:38 PM No comments: Links to this post

Imagine my surprise when re-viewing the film Gattaca recently to notice that Frank Lloyd Wright's Marin County Civic Center was used in the movie as the headquarters of the Gattaca Corporation. The distinctive, Space-age forms

of the building--circles, semicircles and lozenge shapes--figure prominently in many shots in the film, echoing forms introduced in the narrative: planets and moons, egg cells, and the double helix of human DNA. I think Wright's rather impersonal, mannered building provides the perfect spatial atmosphere for this tale of police-state genetic profiling and discrimination. 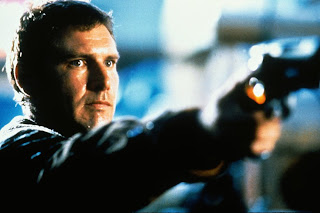 More familiar to many in the overlapping realms of Wright and Science Fiction fandom is detective Rick Deckard's apartment in Ridley Scott's modern classic, Blade Runner - aka the Ennis House, Los Angeles. To supplement this textile block house's role as neo-noir flat, the film's production team made fibreglass tiles using the same geometric motif found in the concrete blocks; some of these faux textile blocks remain in the house today.

Wright enjoyed movies in general, though it's anyone's guess what he would have thought of his buildings used as backdrops for such tales of futuristic dystopia.
Posted by EJF at 1:27 PM 3 comments: Links to this post

Being an ongoing series of postings on missing artifacts from Frank Lloyd Wright's Martin House complex [not the hapless passengers of Oceanic Flight 815].

This week: over a barrel

The "barrel" chair is one of Frank Lloyd Wright's most successful furniture designs for the Martin House--and one that he "recycled" for a number of later houses, including his own beloved Taliesin. These lightweight, elegantly curved chairs seemed to be a favorite of the Martins as well: a number of family photos show individuals relaxing and reading in these chairs. The somewhat whimsical term "barrel" stems from the roughly cylindrical shape of the chair, its slats resembling the staves of a wooden barrel. 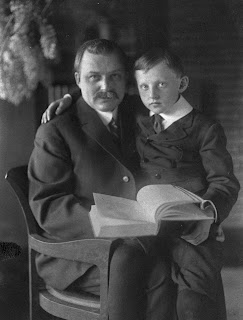 R: Darwin D. Martin posing with his son, Darwin R., in one of the barrel chairs, 1912. Photo by Muller, courtesy of the University Archives, University at Buffalo.

There was a compliment of perhaps eight barrel chairs originally produced for the Martin House - used in the living room, library and reception room. Only two of these chairs remained in the house in the University at Buffalo era; tragically, one of them was stolen in December, 1990, prompting the University to close the house and suspend public tours. To date, there are no leads on the identity or whereabouts of the perpetrator.

One original chair remains in the Martin House collection, secure and appropriately stored at the New York State Bureau of Historic Sites collections facility at Peeble's Island, New York (near Albany). Another original barrel chair is held in the collection of the Albright-Knox Art Gallery, Buffalo.

As always, we welcome any and all information regarding the loss of this important piece of furniture. Anonymous tips will be gratefully considered.

Somewhere out there, someone's enjoying this comfortable Wright-designed chair (a rare category indeed!), but the guilt might be making them squirm...

Posted by EJF at 10:26 AM No comments: Links to this post

It was high drama at the Martin House Restoration Corporation offices on Thursday, December 18 (2008), as a rare art glass laylight from one of the pier clusters of the Martin House unit room was offered at auction through Sotheby's in New York. The laylight is an outstanding example of Wright's art glass designs for the horizontal plane, with a symmetrical array of iridescent and opalescent glass squares and rectangles that reflect the rhythmic geometry of the Martin House floorplan.

Martin House staff and advisers were on the phone that morning to bid in the auction when the lot came up, with funding promised by a generous local benefactor. The action in the salesroom was lively and, unfortunately, our maximum bid was surpassed in a matter of seconds. In the end - within less than a minute - the fray coalesced to two other phone bidders, and at the hammer, the successful party paid an amazing $180,000 for the piece.

We believe that this is the highest price paid at auction for a single piece of Martin House art glass to date. Other Arts and Crafts items in the same sale fetched high prices as well: $270,000 for a pair of Gustav Stickley andirons, for example (yes, andirons...you know, those metal brackets that hold the logs in your fireplace). David Rudd of Dalton's American Decorative Arts in Syracuse said he was "floored" by a few of the prices from this sale. All this suggests that, despite the widespread downturn in the economy, the market for big-name Arts and Crafts and Wright items is still strong.

Such sale results make our challenge of securing original art glass and returning it to the Martin House all the more challenging. With the many needs of our ambitious restoration effort, it is simply infeasible to pay such prices in the public marketplace. Thus, we must encourage other collectors to consider the benefit of returning such items to their original context. In many cases, this can be accomplished by taking advantage of the tax benefits of donating these items to the Martin House.

Donald Hoffmann makes the case against commodifying components of Wright buildings out of their original context most pointedly in his article "Dismembering Frank Lloyd Wright" (Design Quarterly, No. 155 - Spring, 1992, pp. 2-5):

But the forces most insidiously ruinous to Wright's architecture are a misguided museum world and its twin sister, the errant art market, both of which encourage the dismemberment of his buildings, physically and intellectually, into mere fragments.

Hoffmann may be making his point from an ivory tower high above the marketplace, but it remains a compelling admonition to those who might ignore the integral, organic nature of Wright's compositions.

Let's hope that the new owner of this laylight will consider the value of his or her prize beyond the balance sheet and return the art glass to its home in the Martin House. 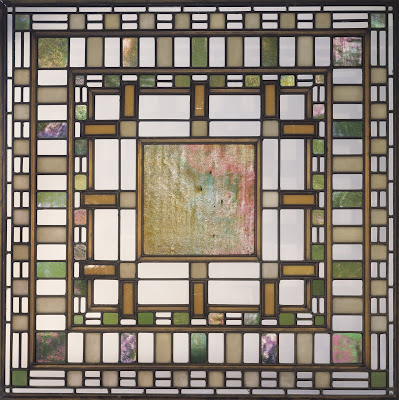 Posted by EJF at 11:31 AM No comments: Links to this post