Another Sidelight Comes to Light

Just when we thought that the late California collector Max Palevsky (1925-2010) had parted with all his Martin House Art Glass, a pier cluster sidelight has come to light in the March 10th sale of 20th Century Design at Sotheby's, New York.

It's unclear why this small piece of glass was not included in previous sales of Palevsky's art glass, but perhaps it got overlooked in the midst of his extensive collection of modern art and design.
Posted by EJF at 4:09 PM 2 comments: Links to this post

More information has emerged via PrairieMod regarding Terrence Malick's impending release, The Tree of Life (with Brad Pitt, Sean Penn and Jessica Chastain) and the director's next film (as yet untitled).  Beyond sharing a name with a certain iconic Wright window pattern, The Tree of Life has no direct allusions to - or inspirations from - Frank Lloyd Wright.  But, hold the phone:  Empire online reports that the forthcoming untitled film, staffing Ben Affleck, Rachel McAdams, Rachel Weisz and Javier Bardem (that's right, friend-o), might revolve around Wright's Price Tower in Bartlesville, Oklahoma.


Now for a readers' poll:

If Malick were to continue his flirtation with Wright and cast a contemporary actor as the famed architect in a film, who do you think should get the part?  Think long and hard, folks - most actors are too tall, and don't look good in a porkpie hat... 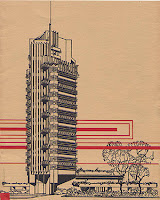 Posted by EJF at 3:51 PM No comments: Links to this post

This is from the "better late than never" category:

All are well worth the trip to 468 Washington Street (at Mohawk), but Amaya's work is not to be missed by architecture fans; it includes laser prints of frenetically-expressive drawings of lost Buffalo landmarks, including the "Rockpile," the 1887 library building, and Frank Lloyd Wright's Larkin Administration building.  Amaya's section of the exhibition also includes lino cut portraits of eminent Buffalo architects, among them Esenwein, Green, Richardson and Wright.

While you're there, why not drop a $5, $10 or $20 in WNYBAC's donation box as a memorial to your favorite, extinct Buffalo building? Better yet, make a contribution to WNYBAC in celebration of your favorite landmark that's been spared.
Posted by EJF at 2:08 PM No comments: Links to this post

This one is for those obsessed with Martin House materials.  Others may want to turn back now, before we head into such esoteric territory:
Wandering through "battleground Martin" (aka the Martin House in the midst of Phase 5A) this week, I noticed a few stray, hexagonal white tiles lingering on the kitchen floor, lonely fugitives from the extensive removals that have been completed in the space.  These hex tiles have long been a curiosity - ever since they were seen peeking out from loose corners of the later linoleum.  Even casual inspection of the Fuermann photo of 1907 shows a square, white ceramic tile on portions of the kitchen floor not obscured by mats.  So, surely the hex tile was a later addition. But who installed it?  When?  And why?
Marjorie Quinlan's Rescue of a Landmark has only this to say about the history of the kitchen floor:  "After repairing the cracked and broken one-inch floor tiles, they laid a floor covered with the same commercial quality linoleum tiles as in the basement" (p. 57). Unfortunately for us today, Quinlan doesn't note whether the tiles that the Tauriellos repaired and covered were square or hexagonal (the hex tiles are 1" across).
Next, I turned to project architect Jamie Robideau.  Jamie had this to say about the tile conundrum:
Clearly, the square white mosaic tile seen in the photo was present in the kitchen when the photo was taken.
The hex tile obviously came later but we don’t know when. Pretty sure the cove base was original and reused. The curious thing about the hex tile is that markings were faintly visible which seemed to correspond with the leg locations of the structural glass counter apron; the same counter seen in the Fuermann photo.
A dynamite start for a murder mystery I would say.
Agreed, Jamie.  If this were a game of Clue, we would only know what room the deed was done in - we don't know by whom, or with what weapon.
Posted by EJF at 1:41 PM 2 comments: Links to this post

Sarah Lawrence College sits on a 41-acre wooded campus just north of New York City.  There, amongst the trees, Frank Lloyd Wright addressed the graduating class of the all-women’s college in May of 1958. 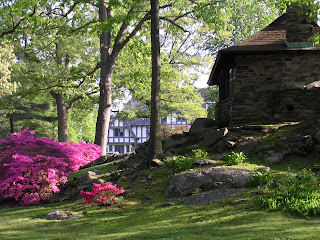 In his address to the group of young women, Wright illustrates the campus as “beautifully green,” “nice and fresh,” and sees the campus as a reflection of what the nation and architecture must strive towards.  He revels in his opportunity to speak to the class upon their graduation and his chance at molding their ideas on architecture, society, and the spirit.
Immediately, Wright divulges his thoughts on American architecture.  “America most needs at this time …is art, and you know we have no religion to go with the Declaration of Independence, to go with the sovereignty of the individual - none.” Wright echoes the beauty of American freedom and the beauty of the individual but in a country without meaningful organic architecture, the nation fails to put substance behind the credo.
As Wright looks to the crowd and attempts to conclude his thoughts and discourse, he reflects back upon his architectural principles.  The organic form, the basis of his work, is rooted in his spiritual reflection of the self and nature.  He sees this architectural foundation as what the American nation is missing and what the women at Sarah Lawrence are capable of. “The principles that built the tree will build the man, and the principles that you find activating nature everywhere are those that will build the man, the woman, and the spirit.”
His commencement address to the students unites Wright’s architectural doctrine and his vision for the American society, city, and individual; it was an opportunity to observe the coexistence of his thoughts and see them geared towards a new generation. 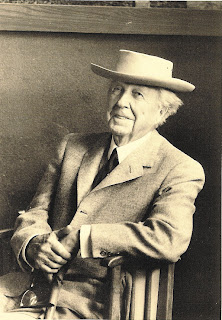 Judith Katz brought this manuscript to our attention.  She was there in the audience as Frank Lloyd Wright spoke directly to her, a member of the Sarah Lawrence class of 1958. By the time of this address, Wright was nearly 91 years old. Although still working, his reflections upon his life and career are evident in his tone.  Perhaps he can sense the opportunity to instill his wisdom and to ensure his legacy in this last year of his life.
Posted by EJF at 8:59 AM No comments: Links to this post

The Martin House Restoration Corporation mourns the recent loss of Mrs. Eleanor Greatbatch.
Born in 1920, Mrs. Greatbatch earned her Bachelor of Science degree from Buffalo State College and became a Home Economics teacher. She raised five children with her husband, Wilson Greatbatch, and later became an accomplished weaver.  She was a steadfast, supportive partner in her husband’s many innovative projects, including the development of the implantable pacemaker.
The Eleanor & Wilson Greatbatch Pavilion was dedicated to Mr. and Mrs. Greatbatch through the generosity of the East Hill Foundation.  The building stands as a testimony to their progressive, entrepreneurial spirit, and their great philanthropy to the Western New York community.
Posted by EJF at 4:04 PM No comments: Links to this post 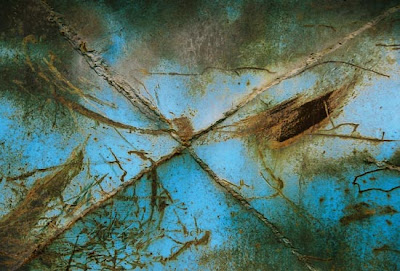 Crumbling industrial buildings, rusting infrastructure and all manner of urban decay:  Western New York has plenty of it.  At least since Charles Burchfield's eerie renditions of factories and Victorian houses in bleak, sooty landscapes, artists have been finding aesthetic value - a certain sense of sublimity - in the reality of the Rust Belt.  Dumpsters and Other Strangers II, an exhibition of photographs by Robert Schulman opening at CEPA Gallery this weekend, features elegant photographic abstractions of Western New York's "vintage" industrial and architectural assets.

Schulman, a pediatrician and prolific photographer, finds our Rust Belt heritage worth preserving.  He sees both harmony and dissonance in it, saying that "[his] photos, poetic jazz-like abstractions, try to capture the beauty of what may soon be gone."  This mission of documenting the antiquated industrial is paralleled by Bruce Jackson's American Chartres: Buffalo Waterfront Elevators, now on view at the UB Anderson Gallery.

Dumpsters and Other Strangers II is one of four exhibitions opening at CEPA this Saturday, 7 - 10 PM.  The exhibition will be on view through March 19, 2011.