(Norman) Foster the People: A Starchitect Visits the Martin House, No Comment on How Much it Weighs...

I was delighted yesterday to have Pritzker Prize winner Norman Foster (Lord Foster of Thames Bank) and his wife, Lady Foster, visit for a tour of the Martin House Complex.  It's not every day that such a "starchitect" comes to Buffalo.  Foster was in town visiting the Albright-Knox Art Gallery, and stopped by to see Wright's opus, accompanied by Pedro Haberbosch (a Partner in Foster + Partners) and UB Architecture professor and Martin House board member Brian Carter.

Of the contemporary starchitects that have become household names - Gehry, Hadid, Libeskind - Foster may be a bit more under the radar.  But his firm has made its mark internationally with a series of stunning projects - from the soaring Millau Viaduct (Millau, France) to the iconic new Reichstag building (Berlin) to the controversial Swiss Re HQ, 30 St. Mary Axe (the "Gherkin") which transformed the London skyline.  Foster + Partners are perhaps best known among Frank Lloyd Wright fans for Fortaleza Hall, the new multi-purpose building on the campus of Wright's Johnson Wax complex in Racine, WI.
Foster's biography is intriguing as well:  born to a working-class Manchester family, his drawing abilities were "discovered" by a Manchester treasury clerk, leading to studies at the University of Manchester School of Architecture and Yale University. He established Foster + Partners in London in 1967, and after building an international reputation over the next two decades, the personal and professional accolades started to accumulate: Foster was knighted in 1990 and appointed to the Order of Merit in 1997. In 1999, he was created a life peer, as Baron Foster of Thames Bank, of Reddish in the County of Greater Manchester, and became the 21st Pritzker Architecture Prize Laureate in the same year.
Foster's wife, Dr. Elena Ochoa Foster (Lady Foster of Thames Bank), is an accomplished Professor of Psychopathology and founder of Ivory Press, a publisher devoted to artist's books.  In 2011, Lady Foster and Ivory Press produced an engrossing documentary on her husband's work, entitled How Much Does Your Building Weigh, Mr. Foster?  The acclaimed film will be screening in major US cities later this year.
Posted by EJF at 10:25 AM 1 comment: Links to this post

Spolia: The Excavated Art Glass Flowers of the Martin Conservatory 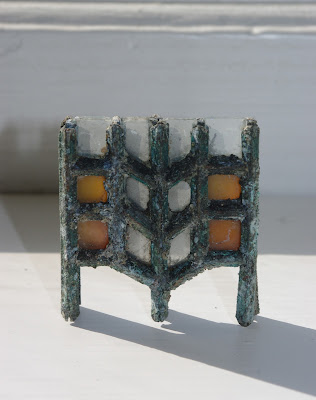 It may be hard to fathom that the original Martin pergola, conservatory and carriage house were razed by bulldozers in 1962.  But this small, sculptural fragment from a conservatory art glass window is a surreal reminder and proof positive that three of five original buildings of Frank Lloyd Wright's Martin House complex were torn down, art glass and all.

The fragment is a "blossom" section from one of the conservatory windows or door panels (left) - small squares and chevrons of glass and caming that suggest a flower head.  These were balanced atop a vertical "stem," accented with triangular, abstract "leaves."  It's a curious piece of modern spolia (literally, "spoils"), a term used to describe the Romans' extensive recycling of architectural elements.  The Romans incorporated fragments of previous buildings from throughout the empire (including Egyptian obelisks, Greek columns and sculpture, etc.) into new structures.  In this case, the recycling process is not complete, but there isn't a similarly evocative term for rescued architectural fragments that become museum collection items (at best) or conversation pieces (at least).
Martin House Senior Curator Jack Quinan recovered this art glass fragment from the back-fill of the original conservatory site in 2004, prior to the reconstruction of the building.  He soon came to refer to that heap of dirt as the "spoils" pile, as it yielded several boxes full of original floor tile, various types of glass, brass caming, fragments of Novus glass and the like.  No pieces of the True Cross, but some "holy relics" of original Wright buildings nonetheless.
For more of the strange and gruesome tale of the demolished Martin art glass windows, see "Stranger Than Fiction" and "Picking Up the Pieces," previous posts on the Weekly Wright-up.
Posted by EJF at 9:00 AM 1 comment: Links to this post 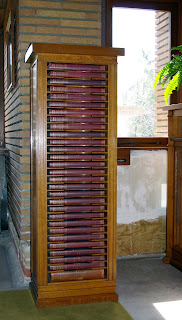 Darwin D. Martin had a fastidious mind with an appetite for factoids.  Long before one could "Google" such information, Martin relied on his Eleventh edition set of Encyclopedia Britannica.  He was known to take a volume with him for some "light" reading on the way to work, and to quiz family members at dinner, with the encyclopedia providing the definitive answers.  Martin's architect, Frank Lloyd Wright, designed a custom bookcase for his beloved Britannica, including a larger slot at the bottom for the index.  Both the encyclopedia set and stand have returned to the library of the Martin House after years of storage and conservation.

And, as of this week, it seems that Martin's beloved set will be even more of a collector's item:  Britannica announced that it will discontinue its hard-copy editions in favor of all-digital publication.

Devotees of handsome hardcover sets of encyclopedia will cry foul, but Britannica is simply trying to keep up with the online behemoth Wikipedia.   Britannica President Jorge Cauz discussed the publisher's strategy and its competition with NPR's Robert Siegel. 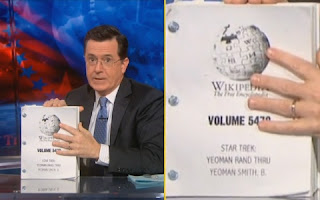 In an inversion of this print-to-digital trend, Stephen Colbert recently played the Luddite by showing off a phonebook-sized volume of his printed version of Wikipedia (Star Trek, Yeoman Rand through Yeoman Smith, B).

How would Darwin Martin or Frank Lloyd Wright have reacted to the digitization of encyclopedic information?  I don't know - look it up.

Posted by EJF at 11:10 AM No comments: Links to this post

I Love New York "Crush:" From Niagara Falls to the Martin House 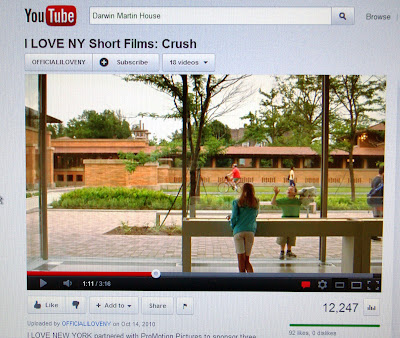 Downton Abbey fans, this one's for you:

The hugely popular PBS program, entering its third season, is set at the Victorian estate of Downton Abbey at the end of the Edwardian era - a time of great social, political and technological change.  One such change, which provides a good deal of comic relief in the first season, is the advent of domestic electric service.  Upon seeing and electrified chandelier in one of Downton's retrofit salons, the Dowager Countess (Maggie Smith) shields her eyes with her fan and exclaims "oh...the glare!  I feel as though I'm on stage at the Gaiety!"  Later, below stairs, the staff discuss other large houses that have been electrified - even in the kitchen - and kitchen maid Daisy wonders aloud "whatever for?"  Both the family and staff at Downton express fears of the "vapors" produced by this strange, new power supply in their midst.


The main set for Downton Abbey is Highclere Castle, ancestral home of the Earl and Countess of Carnarvon.  The current house on the site is a Victorian, gothic revival tour de force designed by Sir Charles Barry (who famously created the Houses of Parliament, London). Highclere was retrofit for electric service by Almina, Countess of Carnarvon, in 1895 [see video:  Downton Abbey - a House in History].  Although many large, aristocratic English houses were electrified by the beginning of World War I, domestic electric service was not widespread in the UK until well into the 20s (by the beginning of the decade, fewer than 10% of British households were wired to an electrical network, and most of those utilized it for lighting only - Daisy, take note).

Meanwhile, in Buffalo, NY, the elite of the Queen City were building their own Beaux Arts and gothic revival mansions, and supplying many of them with electricity from the start.  The Darwin D. Martin House was no exception:  the house was designed to be electrified, yet, surprisingly, not by virtue of the massive supply of power being generated 20 miles away at Niagara Falls, but rather by a private dynamo located in the carriage house basement.  This was not uncommon, at a time when Niagara's hydro power was being used primarily for street-lighting and industrial applications.  But it does seem ironic in retrospect that the Martin House, built a stone's throw from the electrical displays of the Pan-American Exposition (1901), should require its own source of power.  The Barton House, pilot project for the Martin House complex, was equipped for gas lighting originally, but soon converted to electric (using the same fixtures).

Of course, the Martin House - described by the Illustrated Buffalo Express as a "Jules Verne" house ("A House of Many Oddities," 9 October, 1904) - was unconventional in most every respect.  But one has to wonder whether the staff at the Martin House feared electrical vapors or scratched their heads over the potential of an electrified kitchen.

Use your electrical computing device to CLICK HERE for a fascinating history of electricity at the Biltmore estate.

And - an interesting blog post on Downton, electricity and the future of energy HERE.

Experts on the history of electricity in Buffalo are invited to weigh-in and provide further factoids, corrections and clarifications, without resorting to fisticuffs, please.

Wright in the Middle (East)

Well before it was scarred by recent wars, Baghdad was an urban hub of the Middle East which inspired romantic, Arabian-Night visions in the likes of Frank Lloyd Wright.  Wright's elaborate plans to modernize the city, drawn just a few years before his death, are on view in the exhibition Middle East City of Mirages, Baghdad, 1952-1982, at the Center for Architecture, New York.

Wright's fantastic Baghdad plans are fascinating as prime examples of Daniel Burnham's aphorism for urban planning, "make no little plans."  Wright's radical re-visioning of the city was to include every element of the dashboard of modern, urban culture (Western culture, at least) - from an opera house to an art museum to a new university.  And these buildings incorporate all the trademark forms of Wright's work of the late 50s:  circles, domes, spires and spirals - the latter inspired by Iraqi monuments such as the spiral tower at Samarra, and most notably manifest in Wright's last built project, the Guggenheim Museum, New York (completed 1959).

Middle East City of Mirages also includes Baghdad plans by Aalto, Le Corbusier, and Venturi, and runs through May 5th.
Posted by EJF at 9:45 AM No comments: Links to this post

"Elicit" should have been "illicit" in last week's post on Magnesite.
I blame my confusion on a Ferengi mind control scheme.
Posted by EJF at 2:53 PM No comments: Links to this post