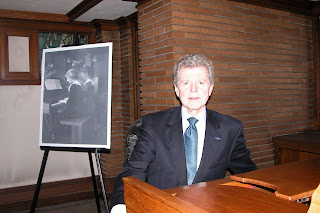 :
The pianist Van Cliburn plays the Steinway grand during a visit to the Martin House Complex on September 14, 2007.
Posted by Susana Tejada at 2:43 PM No comments: Links to this post


The semi-annual board meeting and "Out and About Wright" event of the Frank Lloyd Wright Building Conservancy was held last Friday and Saturday in the Ybor City neighborhood of Tampa, Florida, followed by a tour of Wright's Florida Southern College campus in Lakeland. Wright began work there in 1938 and continued until his death in 1959 completing seven buildings connected by a series of wonderfully sculptural shade-providing concrete esplanades (above). The campus has grown as campuses do and now it has 64 buildings. The most recent building, a Usonian house  (below) that Wright designed for the campus in the 1950s, raises the thorny question of authenticity that has plagued the Wright world since 1959 and especially since the Frank Lloyd Wright Foundation  made a practice of selling Wright's unbuilt plans to clients in the 1980s and 1990s (a practice that has fortunately been curtailed).


This writer has been hostile to the building of Wright's work posthumously as a result of having drawn upon the hundreds of letters, drawings, and related documents pertaining to the design and buildings of the Darwin Martin House in Buffalo for several books. If the Martin House is any example, an authentic Wright building was the result of an intense involvement on the architect's part over a period of years; in the case of the Martin House monthly visits to Buffalo over a three year period.

On the other hand in his later years when Wright's Usonian designs were being supervised by his apprentices all over the United States, there were houses such as the Zimmerman House in Manchester, N.H., that Wright never saw. Now this "new" Usonian at Florida Southern. Is it authentic? The answer doesn't seem to be a "yes" or a "no" but rather it lies somewhere on a sliding scale between 10 (yes) and 1 (not at all). I would put it very high up on the authentic scale. It is a Wright design and Florida State is his client. Although it is not finished, the quality of the craftwork is excellent. Most important, I think, is that the building is an unusual version of the Usonian ideal that spreads out in four directions using generous cantilevers that does not conform to the five typologies -- polywog, in-line, raised, hexagonal and diagonal -- that John Sergeant established in Frank Lloyd Wright's Usonian Houses in 1976. In a clinical sense the Usonian under construction at Florida Southern offers an opportunity to experience a unique Wright space that was otherwise inaccessible, simply a drawing on paper. If this is true then why not build all of Wright's unbuilt designs? Three reasons come to mind: First, owing to contemporary building codes, the availability of materials, and the increasing height of the average person since1960 (the average male is 1 1/2 inches taller today than in 1960; the woman 1 inch) the reproduction buildings are invariably altered in the process. Second, the proliferation of inauthentic Wright houses diminish the validity of the authentic ones. Third, Wright's designs belong to a specific period in history that ended in 1959. Even as we preserve the past we have  an obligation to support the architects and the architecture of our time -- the 21st century.
Posted by Unknown at 12:20 PM No comments: Links to this post


I'm about to go to Tampa for a board meeting of the Frank Lloyd Wright Building Conservancy and a visit to Wright's Florida Southern campus in nearby Lakeland. In addition to planning future meetings and events there is certain to be a hearty round of congratulations to our president, Larry Woodin, to Janet Halsted, our Executive Director, and to Neil Levine, Susan Jacobs Lockhart, John Thorpe, and others who played vital roles in the rescue of the David Wright House in Phoenix.

Coincidently, I have been reading Curtis Besinger's Working With Mr. Wright: What It Was Like (Cambridge University Press, 1995). Besinger joined the Taliesin Fellowship in 1939 and remained with Wright (except for a three year hiatus) -- working on many of his commissions -- until 1955. Besinger's account of the design of the David Wright House remains fresh and imparts something of the importance of the house in Wright's oeuvre:

"...we also started working drawings for a house for Mr. Wright's son, David and his wife. The design that Mr. Wright had titled "How to live in the Southwest" was, with a few changes, the design of David's house. David was the sales representative in the Phoenix area for the Besser Manufacturing Company, an outfit that produced machinery and equipment for making concrete blocks including molds for the various kinds  and shapes of blocks. One of the constraints in making the drawings for David's house was to use only those blocks that could be produced with Besser molds. We used only one special block, the one with a decorative pattern that forms the edge of the elevated concrete slab on which the house rests..." [p. 222-3]


Besinger continues:  This house, supervised by Gordon Chadwick, was very well built. What particularly impressed me was the carpentry work on the ceiling of the master bedroom. The roof of the bedroom wing was another of those that had different pitches on each side. The ridge of the roof was over the partition separating the corridor from the bedrooms. The steeper pitch was on the corridor side. The roof, however, did not terminate in a gable as might be expected. The end wall of the master bedroom was a half circle. The eave of the roof was horizontal and a hipped roof here made a transition between the different slopes of the sides. The ceilings of the bedrooms reflected the external form of the roof. They were made of lapped mahogany boards. But that of the master bedroom was like the construction of a boat. It was a conical surface with boards becoming increasingly narrow in making the transition from their spacing on the shallow side to their spacing on the steeper pitch of the other side.[p. 236-7]

If Besinger's description seems overly complicated it is because the house, despite the stark simplicity of the concrete block, is a work of extraordinary craft and a remarkable achievement for someone in his eighties.


Posted by Unknown at 3:14 PM No comments: Links to this post

John D. Larkin built the Larkin Soap Company into a nationally powerful mail order business through a combination of hard work, a passion for plowing profits back into the business, and an uncanny knack for hiring the right underlings. Bringing thirteen year old Darwin Martin to Buffalo as bookkeeper for the business at $3 per week was risky, however, and Larkin proceeded cautiously as this passage from Martin’s autobiography attests:

Mr. Larkin’s safe was a small affair but it held the ledger and order-books and tissue letter-books with which I had to work. The safe had to be locked overnight. I was never given the authority to unlock it. Every morning I chafed at the loss of time waiting for the arrival of the horse-and-buggy which always marked the beginning of Mr. L’s business day. I stood over him so many times while he worked the combination that I quite unconsciously absorbed the secret of the three numbers.
One morning I grew so impatient that I tackled the combination, and lo and behold it opened and I went to my work.
Mr. Larkin said nothing, but the next morning I found that the combination had been changed. Weeks and months ensued and I found that I was no better off for my safe-opening. But history repeated itself, I tackled the combination again, as impatiently, and again behold I had the safe unlocked!
Nothing was said but the combination was not changed again and I opened the safe daily.  As I reflected on it, it was a silent comedy. When a new, larger Osgoodby safe replaced the Barth safe I was invited to supply the numbers of the combination. Mr. Larkin lived at 218 Swan Street. Mr. Hubbard at 234 South Division Street; therefore I at once suggested a combination none of us could forget, i.e., 21-82-34.

Posted by Unknown at 10:53 AM No comments: Links to this post