Another Tree That Escaped the Forest

The latest stop on my world tour of "Tree of Life" windows in museum collections was Richmond, VA, where I visited the Martin House art glass at the Virginia Museum of Fine Arts.  Their "Tree of Life" window is displayed as part of the Lewis Decorative Arts Collection, and its curator, Barry Shifman, kindly gave me a personal tour.

This particular "Tree of Life" window is in good company - The Lewis Collection is an exceptionally rich representation of Art Nouveau, Jugendstil, Arts & Crafts and Art Deco objects, from furniture and art glass to jewelry.  In this context the Martin window stands as yet another instance of how world-class decorative arts collections seek a "Tree of Life" window as a prime example of Frank Lloyd Wright's design in art glass.

The window is installed in the Wright section of the Arts & Crafts gallery of the Lewis Collection, along with a pair of Coonley playhouse windows, and a number of iconic Wright chairs - including a Larkin Administration building metal desk chair.  The installation as a whole reads like a "who's who" of Wright's designs for furnishings and art glass.  Surrounded by Stickley, Rohlfs and Greene & Greene pieces in the Arts & Crafts gallery, the Wright objects display a geometric affinity with their counterparts, but remind one that "Prairie" is not "Arts & Crafts," or vice versa.  The Greene & Greene pieces from the Gamble House in particular are exquisite examples of turn of the century Japonisme - an influence on Wright, to be sure, but more sublimated in the unique synthesis of his designs. 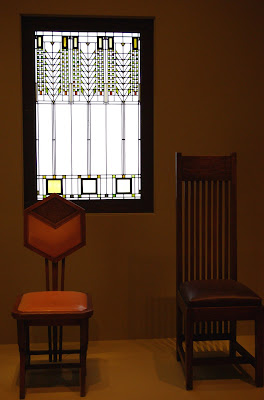 My only regret concerning the VMFA's "Tree of Life" window (shared by Mr. Shifman) is its installation:  set into the gallery wall and back-lit with a less than natural light, its lustrous iridescence is impossible to detect.  Perhaps the installation can be revised so that both sides of the window are visible.  Still, the Martin House window is a highlight of a museum and decorative arts collection not to be missed by those seeking an unforgettable aesthetic experience in Richmond.

Just as Frank Lloyd Wright's design for the Martin's carriage house is no ordinary garage, his windows for the building go well beyond the sort of utilitarian, glazed openings you might expect.  In fact, it's the carriage house art glass design that William Martin cites to his Buffalo brother Darwin when giving a field report on the rigorous, uncompromising work under way in Wright's Oak Park studio:


The labor required from Mr. Wright is simply immense.  You ought to come to Chicago and spend two or three days in his office and you would then better understand how they are able to arrive at, and create such homes.  Mr. Wright showed me several sheets of paper on which he had been drawing designs for the glass for your barn [carriage house], and had only just arrived at what he wanted.  Any one of the designs that he had discarded would have satisfied an ordinary man, and only he knows when the thing is right or wrong, and unless he gets it right he keeps on trying.

This passage is notable for two main reasons:  1) it attests to how Wright was obsessed with "getting it right," even when it came to detail so seemingly insignificant as windows for a "barn," and 2) it refutes the common myth that Wright's "genius" was of the God-given sort, such that every design idea sprang, fully-formed and immutable, from his mind.  This is especially evident when looking at the next line of William's letter:


It is the same throughout the house.  His tracing cloth shows the results of his labors, as it is ragged in many places where changes have been made repeatedly.

Later, Wright himself would say "an architect's most useful tools are an eraser at the drafting board and a wrecking bar at the site."  Fortunately, not all of Wright's experimental sketches for the Martin carriage house glass design were erased:  one variation of the window design remains, on the same sheet with the ultimate design (below). 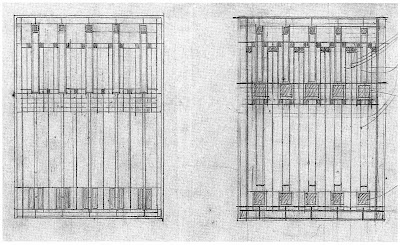 Posted by EJF at 4:25 PM No comments: Links to this post 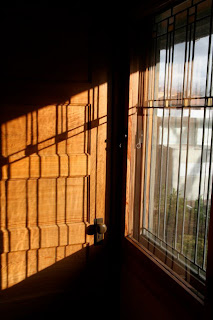 Architect / artist / author Karen Tashjian has launched her own website, including vivid images of her paintings, set designs and publications - e.g. her book on the the Martin gardener's cottage.
Posted by EJF at 1:32 PM No comments: Links to this post

And in Other News...

The Clarkson carriage house window story is also in the Buffalo News.
Posted by EJF at 12:20 PM No comments: Links to this post

Posted by EJF at 9:47 AM No comments: Links to this post

Frank Lloyd Wright may not have been the most patriotic of Americans by today's standards, but one incident in the course of hashing-out the details of the Martin House interior inspired a classic quip on the colors of Old Glory:
Dear Mr. Martin -
When you put in the Blue terra cotta don't forget the red and the white - let us be patriotic - but say, just build the backing and leave the facing to the glass mosaic man.
[letter of 13 October, 1904] 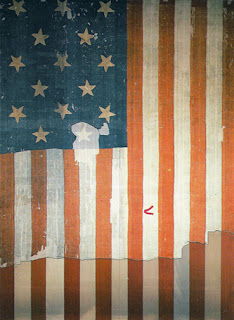 Here, Wright playfully chides Martin in order to dissuade his practically-minded client from finishing the central Martin House fireplace with off-the-shelf blue tile.  The more aesthetically-rich, custom mosaic of intertwined wisteria branches, leaves and blossoms, rendered in lustrous, gilded glass tiles, was more in keeping with the "domestic symphony" Wright sought for the Martins' new home.  But apparently, Mr. Martin thought the tile equivalent of a Sousa march would be just fine.
Posted by EJF at 3:31 PM No comments: Links to this post