Return to the Island

I just returned from two days on the Island - no, not the mysterious island beloved of LOST fans, but rather Peebles Island, home of New York State Parks' Bureau of Historic Sites, our strategic partner in collections care and conservation. 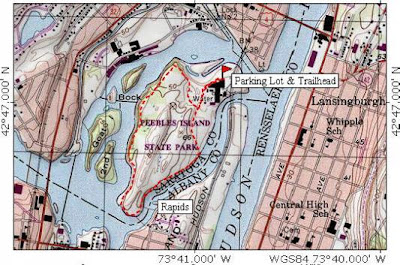 The expert staff of conservators, curators and administrators at Peebles Island is well along with their multi-year process of readying the Martin House collections - furniture, textiles, decorative objects and prints - to serve in implementing the furnishings plan for the Martin House, once Phase 5 of restoration is complete.

On this most recent visit to Peebles, I spent the lion's share of time in the paper conservation lab, working with conservator Michele Philips on issues surrounding the twenty-some Japanese prints in the collection.  In order to preserve the badly faded and deteriorated originals, we have commissioned giclee reproductions - digital, color copies printed on Japanese paper - for display in the Martin House.  Michele and I scrutinized preliminary proofs of these reproductions submitted by Digital Artist's Space to give them feedback on fine-tuning the colors, with a view to making the final prints as faithful to the originals (circa 1907) as possible.

I also spent some of my time on the Island with furniture conservator David Bayne, discussing various outstanding issues in the repair, stabilization and cleaning of wood furniture pieces in the collection, as well as planning the reproduction process for a number of pieces not represented in the collection.  The latter is particularly challenging (not to mention fascinating), as it entails a good deal of design extrapolation from scant evidence in order to reproduce missing pieces such as the library and dining tables and "Morris" chairs.  David and I will be seeking the services of one or more skilled furniture makers for these reproductions - craftsmen attuned to Frank Lloyd Wright's unique designs and often unorthodox methods of construction.

My visit also included consultation with the decorative arts conservator and curators - all invaluable partners in addressing the myriad technical and interpretive challenges inherent to conserving and displaying this unique collection.
Posted by EJF at 5:09 PM 2 comments: Links to this post

Long regarded as a tour de force of masonry, the Martin House Complex has recently garnered another recognition for its bricks and mortar in the latest "Brick '10" publication assembled by Wienerberger AG, the world's largest brick manufacturer.  "Brick '10" is a beautifully produced book profiling Wienerberger's annual "Brick Awards" for contemporary, international brick architecture; the publication also includes an article by myself and restoration architect Ted Lownie profiling the Martin House Complex from the perspective of reproduction historic bricks applied to a distinctive reconstruction / restoration effort. 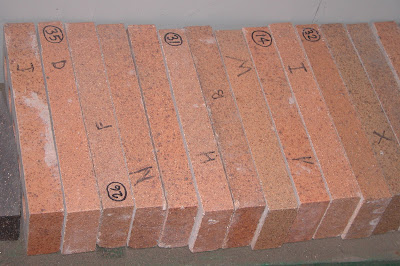 The long and painstaking process of reproduction brick procurement for Phases III and IV of the Martin House Complex restoration, led by Hamilton Houston Lownie, is a case study in the challenges posed by this restoration project in general.  Essentially, materials are too uniform today - digitally engineered, mechanically produced and laser cut. They are, for the most part, made for consistency.  Thus, the restoration team for the Martin House Complex sought "consistent inconsistency" of materials to mitigate the inherent artificiality of the reconstructed and restored elements of the buildings.  Once an acceptable brick match was found (Belden Brick Company), the masonry contractors underwent extensive training to reproduce the unique, horizontally-raked brick walls and piers that Wright once described as "like a finely corded silk."  The masonry of the Martin House Complex, new and old, achieves such a fine, "woven" quality only by virtue of its meticulously chosen materials.
Posted by EJF at 4:07 PM No comments: Links to this post

Anybody got a couple million to spare?

That "other" Martin House is for sale... 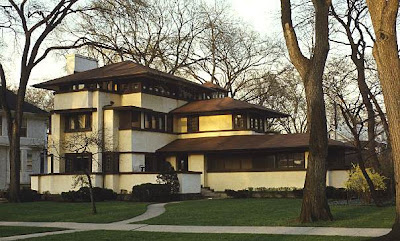 Posted by EJF at 11:10 AM No comments: Links to this post 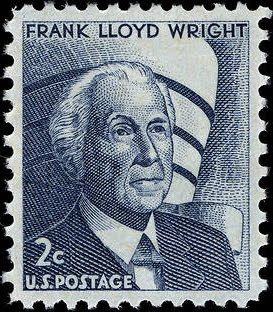 Last week, stamp collector Roger Gross brought a few interesting pieces of Frank Lloyd Wright ephemera our way:  First Day of Issue cachets (booklet panes) and a First Day of Issue Ceremony program pertaining to the Buffalo release of the 2-cent Frank Lloyd Wright stamp in 1968.
Designed by the Taliesin Fellowship, the stamp features a dignified portrait of Wright (rendered from one of his favorite photos of 1952) in the foreground, and the iconic, expanding spiral of his Guggenheim Museum in the background.  Wright never saw the completion of this controversial, late masterpiece, but the two are forever linked in this tiny work of art.
Some histories indicate that the collaboration between the Taliesin Fellowship (then under the direction of Olgivanna Wright) and the U.S. Postal Service to issue the stamp was part of a campaign to reconcile the Fellowship and the Federal government after a dispute over back taxes.  The stamp was first issued in Wright's "home town" of Spring Green, Wisconsin in 1966, and re-released nationwide in 1968.
The First Day of Issue ceremony in Buffalo was held at One M&T Plaza, the recently-opened building designed by Minoru Yamasaki (of World Trade Center fame).  Presiding over the unveiling of the new 2-cent Wright stamp were representatives of the Plewacki American Legion Post Stamp Society, Buffalo Postmaster Myron Blakeney and the Hon. John L. O'Marra, the Assistant Postmaster General of the United States.  Text on the back of the ceremony's program puts Wright in the context of his "Buffalo venture," citing the Larkin Administration building as an embodiment of "the imperishable concepts of Frank Lloyd Wright."  The history goes on to position Wright's Buffalo work in a lineage of modern American architecture that includes Sullivan's Guaranty building, and Yamasaki's One M&T tower, another example of the "continuing trend of functional design aimed to serve the client."
Curiously, this history makes no mention of the demolition of the Larkin building.  But then that familiar tune by Harold Arlen and Johnny Mercer comes to mind:  "Ac-Cent-Tchu-Ate the Positive."
Posted by EJF at 11:02 AM No comments: Links to this post

This week was marked by another curatorial "field trip" - this time to Philadelphia.

First, I visited the Spruce Street home of Margy Meyerson, former UB First Lady and resident of the Martin House in the late 60s.  In the course of showing me around her stately brownstone (c. 1870) and equally impressive art collection, Mrs. Meyerson pointed out a number of brass light fixtures originally from the Martin House, which now grace her study and stairway.  These were given to the Meyersons by Darwin R. Martin, and now add an early modern accent to their aesthetically-rich decor.  An example of this fixture is already in the Martin House collection; it too was deposited there by the Meyersons.  An interesting story accompanies the installation of these fixtures in the Meyersons' Philadelphia home:  they had secured the services of a friend - one Louis Kahn - to remodel a section of the house.  Kahn produced plans for a light-filled breakfast room at the juncture between the main house and service wing, but the Meyersons' request for a new lighting design for the adjoining dining room remained unresolved.  Eventually, Mrs. Meyerson said, they grew tired of waiting for Kahn to produce designs for new light fixtures, and installed the Martin House fixtures instead.  Eventually, "Lou" came around, saw the Wrightian hardware in place, and declared that they "looked OK" - perhaps relieved that he was off the hook for that remaining detail. 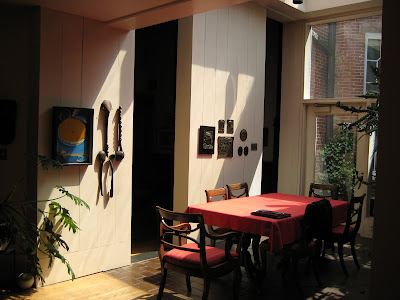 Below:  one of the Wright-designed light fixtures. 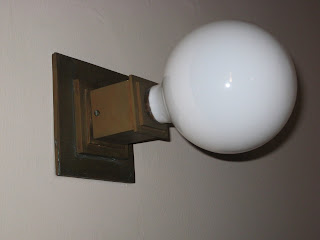 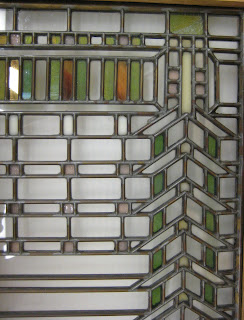 My next stop was the Philadelphia Museum of Art, to survey the pier cluster casement panel in their collection.  This fine example of Martin House art glass was acquired relatively early in the course of the "art glass diaspora:"  in 1968, from the show and sale of pieces at the Richard Feigen Gallery, New York.  I'm happy to report that the panel is very well preserved, with bright brass caming that suggests that it might have been conserved at some point.

Following a ceremonial ascent up the "Rocky steps" at the Museum's main approach, I downed a few raw eggs to fortify myself for the long trip back to Buffalo. 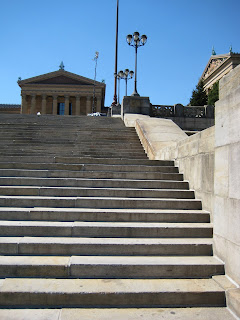 Posted by EJF at 12:53 PM No comments: Links to this post