Picking Up the Pieces

When it comes to the scattered bits of the Martin House Complex, it's remarkable how the smallest piece can tell a story.
Artifacts of the 1962 demolition of the pergola, conservatory and carriage house are still coming to light, nearly half a century later.  Just this week, Robin Warren, an architect from Weedsport, NY visited the House and gave us a piece of iridescent glass in a frame of wide caming.  The rectangular piece appears to be a component of a carriage house window.  Each of the "garden variety" carriage house windows that spanned the perimeter of the second floor (three of which have been reinstalled) had ten such pieces - two rows of five rectangles across the pane.  But the plot thickened when I noticed that the piece returned by Mr. Warren is slightly more rectangular than its counterpart in a typical second floor window.  Such a size variation suggests a subtle shift in the geometry of the window as a whole.
One possible location for such a variation would be the two high windows that flank the main doors of the carriage house on the south elevation.  These windows are barely visible in one of the Fuermann photos of the carriage house.  Two rows of seven rectangles each are discernible, but it's impossible to tell whether they're the same dimensional variation as Warren's artifact.

It's just one of those many instances when a time machine would come in handy.
Posted by EJF at 4:32 PM No comments: Links to this post

In WNY We Trust 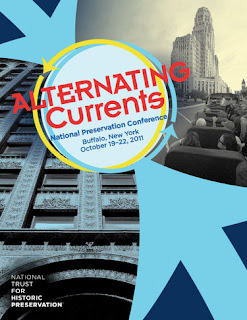 Much as I love Artvoice as a contributor and avid reader, I bristled at Zachary Burns' characterization of the National Trust's Annual Preservation Conference in this week's issue.  Burns' sarcastic comments about volunteers "dressing up" Buffalo to "hide [its] shame" for the sake of "streetcars and steel mills" of no apparent value smacks of the widespread and tragic misunderstanding of the practice of historic preservation and its potential to make a substantially positive impact on a nation and culture in the midst of painful flux.

I have to wonder if Burns stopped typing long enough and stuck his head out the window to feel the palpable energy that the Trust has brought to Western New York this week.  If nothing else, the thousands of preservationists from around the nation have provided crucial perspective on Buffalo / Niagara's burgeoning preservation scene - the accolades have been humbling and inspiring, and what reason would these out-of-towners have to sing our praises if they weren't genuinely impressed with how WNY is reinventing itself as a mecca for cultural, historical and architectural tourism?

I know that I may be a little close to the action to be objective on this, but that's precisely my point about such events that coax Buffalo / Niagara onto the national stage.  Time and time again, we prove that we're really good at being our own worst enemy, and it takes visitors from Tucson, Baltimore, Galveston and Santa Barbara to say "OMG - Buffalo?" to make us realize what genuine power of place and strength of community we have here.

And it's not just small city dwellers that have had their socks knocked off during the Buffalo conference.  New York's grande dame of architectural preservation, Dr. Barbaralee Diamonstein-Spielvogel, said that the Martin House is "a singular vision executed to perfection" and promises to spread the word about Buffalo's gems when she returns to the City. How many such statements will it take to convince the naysayers that if you rebuild it, they will come?

So Mr. Burns' weekly scorecard is in need of some revision:  the National Trust's Buffalo conference was one for the "win" column, and our leadership role in "Preservation Nation" is secure.
Posted by EJF at 1:07 PM 4 comments: Links to this post

Lest you think the Weekly Wright-up has been shut down by the FCC, here's a late post to say that our editorial staff has been distracted by the exciting work of preparing the Martin House for this week's visit by more than 2,000 preservationists attending the National Trust's annual Preservation conference.

Each day of the past week has brought transformative additions to the Martin House, as we roll-out elements of the interior furnishings plan:

On Thursday, we installed the golden-green carpets, according to Wright's carpeting plan for the first floor of the house.  Later that day, the Martin family's custom, oak-veneered Steinway grand piano returned from its vacation across Jewett Parkway at the Wicks house (thank you Donna DeCarolis and Henrik Borgstrom).

On Friday, assisted by two of our outstanding conservators the New York State Bureau of Historic Sites, we took delivery of some thirty-five pieces of historic furniture (much of it Wright-designed) and decorative objects.  Each of these pieces, to varying degrees, has enjoyed conservation treatment over the past sixteen years at the Bureau of Historic sites' Peeble's Island collections center.

Today (Monday), we added accents of silk flowers and ferns, based on arrangements seen in the 1907 Fuermann photos of the Martin House interior.

The cumulative effect is nothing short of breathtaking.  But don't take my word for it--visit the Martin House and see for yourself!

Don't miss Studio Hart's exhibition Three Photographers and the City opening tonight at 6 PM.  Each of the three photographers in this group show - Biff Henrich, Andy Olenick and David Steele - have made exquisite images of Buffalo's architectural treasures, including the Martin House.  This is one of many special exhibitions opening to coincide with the National Preservation Conference coming to Buffalo, and will be on view through November 2nd.

Posted by EJF at 3:34 PM No comments: Links to this post

Errata (Did I Spell That Right?)

A couple of readers brought it to my attention that I goofed with last week's post on the Barton "family" of houses.  The house I pictured in that post is Wright's DeRhodes House (South Bend, IN, 1906).  The mysterious kit house referenced is in Florida.  In any case, both houses are closely related to the Walser and Barton Houses.
Thank you, readers, for setting me straight.
Posted by EJF at 3:22 PM No comments: Links to this post