MORE ON THE MARTIN HOUSE LANDSCAPE

My last blog, on the projected restoration of the Martin House landscape, brought a veritable deluge of information and some well-informed disagreement with my speculation that Wright may have fired Walter Burley Griffin because he (Wright) did not like Griffin’s floricycle. The fusillade (a shot heard around the world – literally) came from Christopher Vernon, Professor of landscape design at the University of Western Australia in Perth, and he should know. Currently at work on a book on Walter Burley Griffin, Chris is the author of numerous articles on the leading American landscape architects Griffin, Jens Jensen, and Wilhelm Miller, many of whom knew or worked for Frank Lloyd Wright at various times. In Chris’s estimation Griffin designed the Martin landscape, Wright approved of the design, and it should be the basis for any restoration. He points out that Griffin left Wright’s office primarily because he won the substantial commission to design the landscape for what is now Northern Illinois University at Dekalb in 1906.  Griffin was outgrowing his role in Wright’s office just as Wright had outgrown Louis Sullivan but he remains somewhat underappreciated in the United States because he left for Australia in 1912 where he, and his talented wife, Marion Mahoney Griffin, enjoyed splendid careers before moving on to India to work. Griffin’s Australian work begins in a Wrightian vein but is transformed in the 1920s  (see picture) into an exuberance reminiscent of Bruce Goff.  It turns out that Griffin took a substantial record of his work for Wright, including 1907 Fuermann photographs of the Martin, Barton, and Heath houses in Buffalo, a drawing of the Larkin Building, garden plans, and numerous photographs of his independent work in the United States, which now reside in the National Library of Australia. http://www.nla.gov.au/apps/cdview/?pi=nla.pic-vn3944294.
Christopher Vernon notes that Griffin returned to the United States for a visit in 1932 and made a special visit to the Martin House that he recorded photographically – additional proof that the landscape was largely his. Hopefully Christopher Vernon will also make a return visit.
Posted by Unknown at 3:05 PM 1 comment: Links to this post

Currently the Martin House is an architectural photographer’s dream, of sorts, in that the buildings reside on a veritable carpet of green grass (except for the northwest garden behind the house) and the elms and maples that once screened the property along Jewett and Summit avenues are long gone. The setting would be more appropriate to Le Corbusier’s Villa Savoie. Plans are underway, however, to restore the landscape, a task made formidable because of a jumble of evidence: four or five original drawings that are not consistent, numerous historic photographs not all dated, fragments of the original plantings, and letters referencing the purchase of certain plants. Then there is Wright’s elegant re-imagining of the entire plan for the Wasmuth portfolio in Berlin in 1910. (above) The largest and most carefully detailed plan, executed by Walter Burley Griffin while Wright was in Japan early in 1905, features an overwrought “floral hemicycle” consisting of 20,000 plants that were to arc around the east porch of the main house. This plan may be the reason that Wright fired Griffin later in 1905. So there are many questions to resolve: Do the early photographs reflect portions Griffin’s plan?  Since Griffin subsequently won the competition to design Canberra, the new capitol of Australia, does his plan merit special attention? Should Wright’s Wasmuth version of the plan be given consideration? These questions will be answered by a team of experts working with  the understanding that the landscape is of the utmost importance to Wright’s unifying vision. 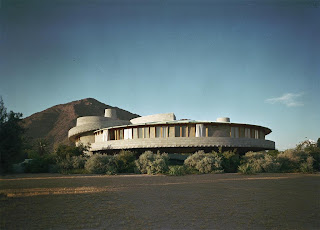 On another matter, Wright’s home for his son, David, in Phoenix, -- named by the architect, “How to Live in the Southwest,” (above) is at risk of demolition.  For an online version of the press release see: www.savewright.org/index.php?t=news_focus&story_id=82 Or write mayor.stanton@phoenix.gov  and express your dismay at the possibility of losing this important building.

Posted by Unknown at 5:51 PM 2 comments: Links to this post

In November 2011 David Patterson, a musicologist from Oak Park, Illinois, gave a wonderful keyboard accompanied presentation on the influence of classical music on Frank Lloyd Wright’s architecture in the Greatbatch Pavilion of the Darwin D. Martin House.  Wright makes it clear in his autobiography that an appreciation of music was the one great gift he received from his father, but it is a fleeting acknowledgment and the weight of significance in Wright’s formation, according to Wright, falls largely to his mother.
Nevertheless, Wright’s architecture is redolent with musicality and this is nowhere more evident than at Taliesin and Taliesin West where music was an essential part of daily life in the fellowship years (and it continues today in the Frank Lloyd Wright School of Architecture) and in Wisconsin Wright was known to broadcast Beethoven across the valley for the edification of local farmers. It appears that William Cary Wright’s impact on his son, once a mere footnote in history, is about to blossom into tangibility and significance: Through years of research David Patterson has located more than twenty pieces of music composed by Wright’s father and is seeking funding through the Kickstarter program to create the first ever recording of the music of William C. Wright.  If he succeeds we can all hear what Wrightheard his father creating during his childhood and historians and critics of music will be able to determine the quality of the work. If you are interested in helping David succeed


Read more »
Posted by Unknown at 12:55 PM No comments: Links to this post