In the 1970s Jack Randall, an architect and historian, asked Darwin R. Martin to review a manuscript that he had written on Wright in Buffalo. Martin's response indicates that he had some measure of his father's extraordinary powers of retention. Some might wonder why we should care, but the building  in question (above) demolished in the 1960s and has since been rebuilt and modified to accommodate a bookstore. This is the best account of what it was like and how it functioned originally. He writes:

"The "Buffalo Venture" [Randall's manuscript] fails to identify the uses of "garage" properly. It was a combination stable and garage. [It] included 2 box stalls and 2 open stalls and a paddock for airing horses. The gas-engine driven d.c. Dynamo was in the basement of the bldg. along with heating boilers -- anthracite coal, hand-fed -- and a "mushroom-cellar" and tool room -- connected direct thru [the] "pergola" under-pass to the main house.

One of the box stalls (eastern one) was converted later into a bank of "EDISON" storage batteries for illuminating [the] entire complex. "Garage" area, i.e., front section, had [a] manually operated Turn-table that that also served as wash-rack for cars and carriages.


[The] family maintained a team of horses plus a brougham and Victoria by "BRUNN" who also made auto bodies for "PEERLESS" chassis. D.D.M.'s first personal car was [a] "MAXWELL" runabout - 1 cyl. "side-winder" circa 1907 or 1908 (I think it was called "Maxwell Messenger").* I have invoices for most of D.D.M.'s early cars but, so far, none for carriages and horses. Later cars were "Pierce Arrow" sedans. There was also an early "Electric" cabriolet - (1st one I think a "Babcock", The last one a "Detroit".) Father drove the "Electric" to work after he got rid of [the] Maxwell (I think about 1920). He preferred to walk to Jefferson St. (now Ave.) and then take the street car to work so he could read on route. Earlier he road the "BELT LINE" that made a stop at Main where the "Trico" plant is now."

[Thanks to Jason Aronoff and Susana Tejada]

* Martha Neri points out that Darwin Martin's first automobile was a Haynes-Apperson purchased in 1904 and sold in 1908 in order to buy the Maxwell. Thanks, Martha.
Posted by Unknown at 10:41 AM No comments: Links to this post

Email ThisBlogThis!Share to TwitterShare to FacebookShare to Pinterest
Labels: Early history of the automobile and horse-drawn vehicles


1893 was a year to remember: An economic depression known as the "Panic of 1893" had a devastating effect on American banks and businesses, and the Larkin Company in Buffalo was not spared.To make matters worse Elbert Hubbard informed his partner, John D. Larkin, that he would be leaving in January 1893 to attend Harvard, and demanded his share in the business. Larkin refused and law suits were threatened.  Darwin Martin, eager to take over Hubbard’s position, was told that it would involve no increase in salary. 1893 was also the year that Frank Lloyd Wright decided to leave Adler & Sullivan and open his own architectural practice in Chicago. Even the high point of the year in the United States was problematic: the much anticipated Chicago world's fair celebrating Columbus’s discovery of America in 1492, was delayed until 1893, but it was a smashing success nevertheless. Four million Americans visited the World’s Columbian Exposition, and Elbert Hubbard and Darwin Martin were among them.

Owing to his abrupt and untimely departure from the Larkin Company Hubbard and John Larkin were not on speaking terms but Hubbard was able to maintain an avid, vested interest in the fortunes of the Larkin Company through his friendly relationship with Darwin Martin.  Darwin Martin noted in his diary on the first of June, 1893, “I  [went] to East Aurora where I walked five miles with Mr. Hubbard and spent the night.” Shortly after that on June 22, 1893 Hubbard wrote Martin an enthusiastic account of his visit to "The Fair," as the World’s Columbian Exposition was known. The letter suggests that Hubbard was aware that the Martins, too, were going to the Fair. “I think five hours a day at the Fair will do one as much good as eight or ten. I spent eight days inside the gates and the extent of the exhibition is far beyond my expectations – far surpassing the Centennial [Philadelphia 1876].” Hubbard's stay at Harvard was obviously short lived.

Despite the slow-down at the Larkin Company the Martins embarked for the Fair in Chicago a few weeks after Hubbard's visit. Ever generous when it came to his family, Darwin fashioned the occasion into something of a reunion. Along with Isabelle Martin, his wife, and Nettie Reidpath, her sister, they were joined by Darwin’s brother William and his family (Chicagoans), his sister Delta and her husband George Barton (who were then also living in Chicago), Darwin’s oldest brother, Frank and his wife, Florence (wanderers), and Maude Martin, Darwin’s half-sister from Nebraska, whom he had not seen for fifteen years. Of her he had only this comment: "Little bit of a girl, lisps."
But why the top of the Auditorium Building? Two possibilities presents themselves: first, the roof of the tower of the Auditorium Building, then one of the highest points in Chicago, was an ideal place from which to survey the city, and Chicago in 1893, home of the Chicago School of skyscraper pioneers, was something to behold. But they may also have been drawn to the Auditorium because its architects, Adler & Sullivan, were then building the Guaranty Building in Buffalo, soon to be recognized as the finest building in the city. At any rate, the rooftop moment places Darwin Martin immediately above the office of Adler & Sullivan where Frank Lloyd Wright was the principal draftsman. Martin and Wright would not meet, however, for another nine years when the Larkin Company executives invited Wright to Buffalo to discuss a new office building. 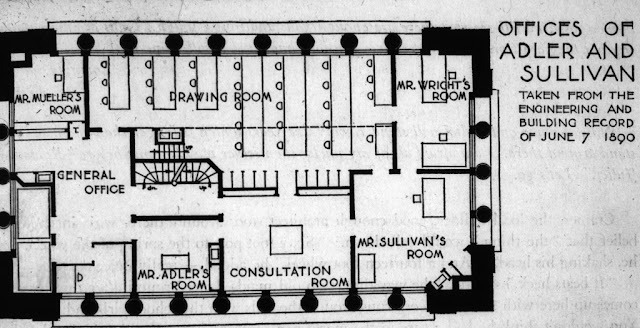 Posted by Unknown at 3:06 PM No comments: Links to this post

WRIGHT AT WORK IN THE PRAIRIE YEARS


Insights into Frank Lloyd Wright's working methods during the Prairie period (1900-1909) are rare and tend to materialize  in little bursts from time to time. Among the best of these is a group of letters written by Charles E. White, Jr., a draftsman who had come to Wright's Oak Park studio around 1903, to his former employer, W. R. B. Willcox, in Vermont. White describes Wright's unit system in detail, in text and sketches, and pays particular attention to the Darwin D. Martin House in Buffalo, which was then being designed. [The letters were edited by Nancy K. Morris Smith and published in the Journal of Architectural Education in the fall of 1971]. This passage is from White's letter to Willcox of November 16th 1903:

"He [Wright] is certainly an impractical man -- is way behind in his work, but calmly takes seven weeks to alter his office, and lets the work wait. The Buffalo drawings are not even completed, and they are hammering him all the time. Promised the Montreal sketches for November fourth, and hasn't even started to think about them! It makes me nervous to think of the way he treats his clients, and yet he seems to get the work all the time."

A similar passage appears in a letter from William E. Martin in Oak Park to his brother, Darwin, in Buffalo, May 20, 1904:

"I called his office yesterday morning, and one of the draftsmen said that he had been working on the plans, and mailed them to you Thursday, but knew nothing about the brick. He said that when Mr. Wright returned from Buffalo, he threw the plans into the corner of the office, which, by the way, has been torn up from stem to stern for the last two weeks, -- and said nothing about any alterations..."

In Buffalo, Wright's erratic methods were subject to Darwin Martin's relentless" hammering," but C.E. White, jr., in the eye of the storm, got an answer from Wright himself and expressed it in a letter to Willcox of May 13th 1904:

"The studio is again torn up by the annual repairs and alterations. Twice a year, Mr. W. rearranges and changes the different rooms. He says he has gotten more  education in experimenting on his own premises, than in any other way."

Wright's penchant for experimentation never ended and is best seen at Taliesin, in Spring Green Wisconsin, Wright's home and studio, built, rebuilt, and continuously expanded from 1911 to his death in 1959. Taliesin is currently under restoration --a task of staggering complexity -- by Taliesin Preservation, Inc.


Posted by Unknown at 11:49 AM No comments: Links to this post

In the early 1980s I sought out Everett K. Martin, Darwin Martin's nephew, at his home in Hyannisport, on Cape Cod where, over lunch, he recalled that during visits to his uncle Darwin's home in Buffalo Darwin would quiz him and the other children on a variety of topics. If they didn't have an answer he would direct them to the Encyclopedia Britannica for which Frank Lloyd Wright had designed a special shelf.


During those same years I made several visits to the home of Dorothy (Martin) Foster at 95 Highland Avenue in Buffalo who told me that her father often took a volume of the Encyclopedia  Britannica to read as he traveled to work on the Belt Line.

Recently, while trying to organize my home office, I came across a single page of carbon-copied typescript. I don't know how I came into possession of it but it includes the following paragraph:

"I had a client once -- Darwin D. Martin -- he made the Larkin Company what it was when it was something; behind him on the table in the dining room was a big dictionary. After I had built the house, I was building other buildings and I used to dine there often, and this thing would come up and Mr. Martin would go over to that dictionary two or three times during a meal -- finding out. And he was a self-educated man; never went to college, didn't have much schooling: he was "the boy from Missouri [Valley]" that Elbert Hubbard wrote a piece about once. But his tireless, ceaseless curiosity concerning everything! And he became a remarkably educated man. He was a Christian Scientist, so far a religion went -- which was kind of a bar across his path -- but still he got somewhere; he was a religious man, and he was the man who had me do the Larkin building. So, the dictionary act is a thing I have inherited; I don't do it often enough. Every morning, we should have this dictionary behind here, because we are going to need it..."

Tantalizing ! Who is this man? What more does he have to say in the rest of the manuscript? (This is from page 14) The line "after I built the house" would seem to indicate that this is an interview with Oscar Lang, contractor of the Martin House, but the line "the man who had me do the Larkin building" points elsewhere since Paul Mueller is generally credited as the principal supervisor of Wright's Larkin Administration Building. Given that Mueller was based in Chicago and was generally occupied with large urban buildings it is highly unlikely that he was building frequently in Buffalo. It is possible that the mysterious speaker, possibly Lang, was in charge of some part of the Larkin Building project, such as masonry or carpentry.  We may never know, but the collective  testimony of three people -- Dorothy Martin Foster, Everett K. Martin, and this builder who was a frequent visitor to the Martin house -- tells us that Darwin Martin's considerable success in life was driven by an insatiable quest for knowledge.