Little Hotel on the Prairie

by Ashley Takacs, special to the Weekly Wright-up 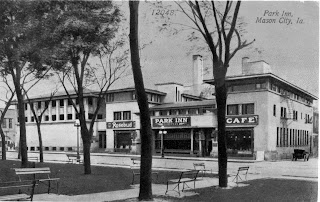 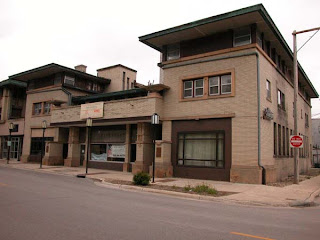 The Park Inn, then and now.

While the Martin House Restoration Corporation approaches its final phases of work on Jewett Parkway, another community of preservationists is embarking on a similar journey halfway across the country. Residents of Mason City, Iowa have formed Wright on the Park Inc., an organization overseeing the work of restoring Wright’s last surviving hotel, the Park Inn.

The group hopes to open the Prairie style hotel to guests in 2011 – a tall order, considering that the building, completed in 1909, has been in a state of neglect for over two decades. Mason City preservationists first made national headlines in 2004 when the City Council offered the building on eBay for $10 million to anyone who promised to restore it. When that failed to draw interest, Wright on the Park stepped in, and the city signed over the deed.

The $18 million complete interior and exterior renovation started early in August, thanks to numerous grants and local coordination. The task includes a comprehensive restoration of the brick and terra-cotta façade, replacement of the art glass skylights and a complete interior reconstruction – in the early 70’s, much of the space had been converted to apartments or altered to accommodate various businesses (including a strip club).

Of more than 500 completed Wright building, only six were hotels. The Park Inn’s massing suggests that it served as a prototype for Midway Gardens in Chicago, and the famed Imperial Hotel in Tokyo, both of which have since been destroyed. Perhaps even more significantly, adjoined to the hotel is the City National Bank, one of two remaining Wright-designed banks. Wright on the Park has purchased the bank, and eventually plans to reunite it with its neighbor.

For anyone interested in spending a night at the Park Inn, make sure to book early. Once completed, there will be a scant 20 suites. And Wright enthusiasts who cannot imagine a weekend without their hairdryer and cable television needn’t worry: the historic gem will be restored to its original splendor, while providing modern amenities that will appeal to today's travelers.

Click HERE for more on the Park Inn and City National Bank. 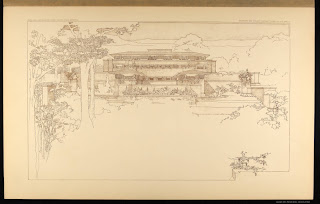 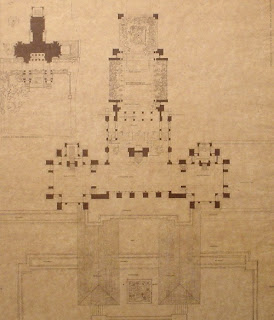 With approximately half of Frank Lloyd Wright's designs never executed, it's often interesting to contemplate his unbuilt compositions in concert with built work of the same period. In the case of the Darwin D. Martin House, one such example that continually intrigues me is the C. Thaxter Shaw House that Wright designed for the Westmount district of Montreal in 1906. The more one looks at the Martin and Shaw designs, the more parallels emerge. I would go so far as to say that the Shaw House was to be the Martin House's Canadian cousin.

Though destined to remain in the realm of "paper architecture," the Shaw House is tantalizingly documented in the Wasmuth portfolio through a perspective and plan. These announce some of the major similarities between Shaw and Martin: their pier construction, extending, hipped roofs, bands of art glass windows, and "outrigger" garden walls. One of the main differences is that the Shaw plan is more rigorously symmetrical than the Martin plan. Robert McCarter likens the Martin and Shaw plans to that of the Imperial Hotel, one of Wright's most formal and symmetrical plans (Frank Lloyd Wright, p. 146). This strict symmetry extends beyond the "unit room" of the Shaw House, but does not in the western half of the Martin House, which hints at the Usonian "L" plans to come.

Although it demonstrates all of the "stock" Prairie characteristics, perhaps the most remarkable thing about the Shaw House is how it adapts the Prairie house to a hilly site. Such adaptations were relatively rare (e.g. the Hardy House, Racine, WI, 1906, built on a bluff overlooking Lake Michigan); the Prairie House, by definition, is most comfortable on a flat, expansive site. With Shaw, the familiar, interlocking Prairie pavilions cascade down a terraced slope. Twin verandas extend at the lower level, like giant hands anchoring the house and gripping the hillside. But with all its symmetrical formality, the perspective drawing of the Shaw House recalls an imposing Roman structure such as the sanctuary of Fortuna Primigenia at Praeneste, an austere, ceremonious presence in the design which may well have dissuaded Shaw from committing to build the house. 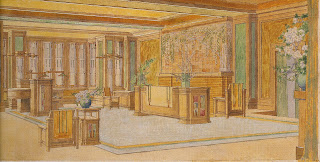 Frank Lloyd Wright Foundation Archives
This compare-and-contrast exercise extends also to the interiors and furnishings of the Martin and Shaw houses. An exquisite presentation drawing of the proposed Shaw living room shows many affinities with the Martin living room and its Wright-designed furnishings: a wisteria-patterned tile mosaic on the fireplace, a sofa with book storage built into the arms, a baby grand piano design, also with built-in book storage (though the Wright-designed piano was not built for the Martins either), and globe-in-square light sconces clustered around the piers. If executed, the tout ensemble of the Shaw living room would have been at least as aesthetically rich as the Martins.'

C. Thaxter Shaw shied away from the new house Wright designed for him, giving the architect the consolation prize of remodeling his existing townhouse. But even here, certain echoes of the Martin commission are evident. A drawing for the remodeled Shaw dining room shows a custom dining table incorporating planting stanchions - extensions of the legs near the corners, and an alcove designated for a cast of the Nike of Samothrace (one of Wright's favorite classical casts, often prescribed for Prairie period buildings). Sound familiar?

Clearly, Wright and his studio had no qualms about "recycling" certain interior and furniture design elements from one commission to the next - all in the spirit of testing and consolidating the Prairie vocabulary of design. Part of what makes the Martin House commission so unique is that its Canadian counterpart was never realized.
Posted by EJF at 2:25 PM No comments: Links to this post

The Guggenheim "From Within"

This week, I had the distinct pleasure of touring the Guggenheim Museum with Curatorial Assistant for Architecture and Design, Maria Nicanor, to see the exhibition Frank Lloyd Wright: From Within Outward. The museum-wide exhibit focuses on sixty-four of Wright's key projects - built and unbuilt - culminating in his final, major built work, the Guggenheim itself. But the iconic package of the newly-restored building, which now re-incorporates certain details on Wright's wish-list, such as real ivy in the interior planters, becomes the omnipresent centerpiece (or perhaps "spiral-piece?") of the show.

The show faced the challenge of any major architectural exhibition: what you might call "drawing fatigue." Architectural drawings can present challenges of abstract obscurity to the general visitor - though the Guggenheim has been presenting such challenges in various media since its founding as a definitive collection of "nonobjective" art. The curatorial team for Within Outward combat this obscurity with a number of models, both old and new, traditional and digital, that help illustrate Wright's design concepts from the relatively utilitarian (the Jacobs I Usonian house) to the utterly fantastic (Wright's expansive master plan for Baghdad). The Jacobs I model is a meticulou 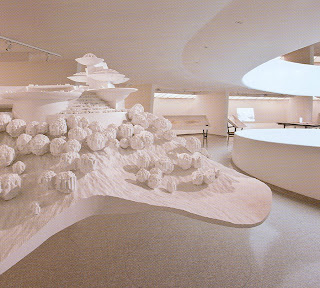 sly detailed tour de force, with the various layers of the house "exploded" in a way that emphasizes the modular and automatic nature of the Usonian concept. Other models, created by Situ Studio, offer ghostly abstractions of some of Wright's utopian, unbuilt designs, such as the Gordon Strong Automobile Objective and Planetarium and the Huntington Hartford Sports Club. Some of these make bold use of the unique space of the museum: the Gordon Strong model hugs the slope of the spiral ramp, and the Huntington Hartford model is boldly cantilevered from one of the reinforced concrete buttresses, reflecting the bracket tree fungus inspiration for the saucer-like cantilevers of the Sports Club itself.

These amazing models aside, the exhibition offers a rare, perhaps once-in-a lifetime opportunity to scrutinize over two hundred masterful drawings from the Frank Lloyd Wright Foundation Archives. These often-reproduced but rarely-exhibited drawings are works of art unto themselves, from the crisp graphic quality of the Wasmuth portfolio renderings, to the radiant color and contrasts of the night views of the Pittsburgh Point Park Civic Center and Lenkurt Electric Company projects. Some of these drawings offer unexpected glimpses of history, as with the panoramic elevations of Taliesin West, drawn on Kraft paper during particularly lean times for the Taliesin Fellowship. One of the most stunning drawings in the exhibition is Wright's perspective of the "Mile High" Illinois building, his colossal skyscraper-to-end-all-skyscrapers proposal. The original drawing is over 95 inches high, its looming scale lost in reproductions. This rendering of one of Wright's most fantastic projects is enhanced further by digital animation that sizes-up various well-known skyscrapers and world monuments with the gargantuan Mile High, then takes the viewer on a dizzying elevator ride to the top of the virtual building, 5,280 feet above Chicago.

Frank Lloyd Wright: From Within Outward is only on view through August 23

, so consider hopping that JetBlue flight to New York to catch this rare opportunity for total immersion in the world of Frank Lloyd Wright. The exhibition catalog alone is destined to become one of the great tomes in the Wright Studies bookshelf, but the exhibition invites visitors to explore the rich spaces wrought by Wright's oeuvre, displayed in the Golden-anniversary reliquary of Wright's last - and most audacious - building.