Cypress at the Source

I had the pleasure of vacationing with my family in New Orleans last week. The city, though still bearing the undeniable trauma of Katrina, is a must-see, replete with a rich, unique culture and history, great food, incredible music, and genuine, southern hospitality. New Orleans almost has it all - except one thing: no Wright buildings.

It was an interesting exercise to imagine what Wright might have designed amidst the picturesque, 18th and 19th century galleried buildings of the French Quarter. The only thing that came to mind was something akin to his Masieri Memorial, an unbuilt 1953 design for the Grand Canal in Venice.

But despite the lack of Wright buildings to distract me from my hiatus (and likely annoy my family), I did find a Martin House connection in an unlikely place: the Honey Island Swamp, northeast of New Orleans and Lake Pontchartrain. There, on a boat tour of the swamp, we saw ancient cypress trees in their natural

setting - trees of the sort that were harvested in the early twentieth century, some destined to become millwork in the Martin House complex. Cypresses have a natural waterproofing - an oil called cypressene - which allows them to grow in semi-aquatic environments such as the Swamp. The same quality makes cypress stock a good choice for applications such as the warm, humid Martin conservatory. Martin House Lead Cabinetmaker Steve Oubre explained recently that the wood used in the reconstructed conservatory trim is actually period-specific, as it was sawn from century-old "sinker" cypress - logs that have been salvaged from the bottoms of Louisiana and Florida waterways and re-sawn for contemporary use. 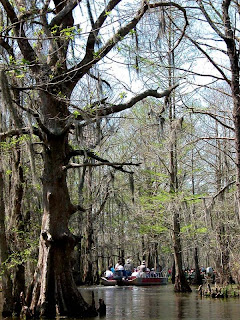 an 600 years old - has been dubbed the "moonshine tree" by locals. Legend has it that once served as a gathering point for local distillers who would congregate by boat to swap and sample one another's moonshine. Our guide said that this tree was spared from the axe a century ago because it had a disease which produced its gnarled trunk and branches. Hung with Spanish moss, it's definitely an icon of Louisiana swamp-gothic.

Posted by EJF at 1:03 PM No comments: Links to this post 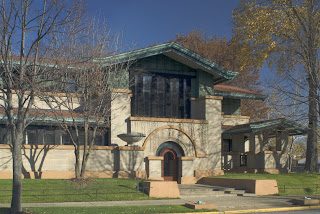 Wright fans and architectural advocates in Illinois are celebrating the news that the Dana-Thomas House (Springfield, 1902) will re-open to the public today, after it was closed to tours late last year, thanks largely to the policies of former (impeached) Illinois Governor, Rod Blagojevich. The official statement from the Dana-Thomas House is:

The Dana-Thomas House will return to regular hours of operation after a re-opening ceremony at 1:30 PM on Thursday, April 23, 2009. Following the ceremony, walk through tours will be available. Illinois Governor Pat Quinn is scheduled to speak at the re-opening of the site.

Thanks to all those who worked to bring change in the Illinois Governor's office, and to those who work tirelessly - regardless of political factors - to advocate for the immeasurable value of cultural assets in Illinois such as the Dana-Thomas House. This important "sister site" to the Martin House Complex is once again accessible, having overcome great obstacles raised by the turbulent economic climate and government's short-sighted response to the same.

Yesterday, a visitor to the Martin House posed a direct question about Wright's palette of geometric shapes used in the complex: "did Frank Lloyd Wright like diamonds?"

I had to think for a minute: diamonds? Was a "diamond" a shape that Wright used? Is the diamond one of the suits in Wright's architectural deck?

The answer was yes...and no.

In the Martin House complex, there are a number of places where Wright employed "diamond" shapes. They include: the floor "lites" in the pergola, the pavers on the pathway to the east of the pergola, the negative space formed by the planters at the "crossing" of the conservatory, the pool / fountain in the garden wall between the drying yard and the carriage house, and the ceiling millwork in the Barton House. But wait a minute - those last two forms are composed of half-squares rotated 45 degrees, otherwise known as right triangles (no pun intended). That led to the realization that, in the Martin House, all of the "diamonds" are really just squares (ubiquitous in the composition) rotated 45 degrees to the surrounding forms or volumes. There is an almost sequential nature to Wright's introduction of the rotated square on the floor of the pergola: pedestrians headed north down the pergola follow a pathway of rotated squares, thus prepared for the dynamic 45 / 90 degree interplay of the conservatory crossing. 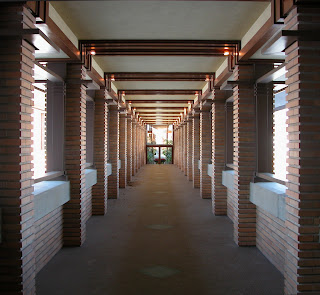 Wright began to experiment with the introduction of rotated squares in some of his earliest compositions - his drawing for his interview with "Lieber Meister" Louis Sullivan, for example. In the Prairie period, Wright began using rotated squares as a simple means of challenging (if not breaking) the box. Right triangles began to emerge from the wall planes of Prairie houses such as Willitts (dining room), Fricke (reception room) and Heurtley (breakfast nook and child's room). Often, these right triangular exedra served as bay windows - alternatives to the more traditional bays derived from octagons or circles. In plan, these triangular bays offered a more obvious dialogue with Wright's beloved square, and began to break the box, ironically, by use of the box's corner.

In the River Forest Tennis Club, Banff National Park Pavilion and Robie House, these right triangular exedra take on the role of "prows" at either end of long, rectangular volumes. In the Robie House, this prow association ties-in to Wright's identification of the house as a dampfer, or ship. Such a parti was already in place as early as 1902, with the ceiling millwor 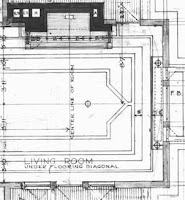 k of the Walser House, progenitor of the Barton House in Buffalo. This same parti - a rectangle with right triangles at both ends, or prism - is also evident in a surprising detail from the Martin House: the copper scuppers that direct water into the pier catch basins on the second floor, like abstracted models of the Robie house used as water conductors (or toy boats?).

Many of the triangular "prows" in the Martin House complex seem to form arrows that correspond to the major axes of the composition, suggesting lines of force that flow from - and through - the composition, aligned with the cardinal directions and their 45 degree divisions. In the Barton House, for example, these "arrows" in the ceiling millwork serve to mitigate the fairly traditional, boxy corners of the dining room and living room; they direct the inhabitant's eye out of the east and west windows, toward the surrounding landscape and structures. The dynamic plan of the conservatory crossing forms a virtual compass at a major node in the cross-axial complex - a point from which all space-shaping lines in the complex seem to emerge.

Thus, the simple diamond question led me to a rabbit's-hole of contemplation regarding the geometry of the Martin House complex, and the dynamic dance produced by a simple "turn" of the Wrightian square.
Posted by EJF at 2:07 PM 1 comment: Links to this post Whether its an old favorite by now, or -miraculously - you've never seen it before, WNED's ThinkBright TV (digital 17.3 or Time Warner channel 21) will air Frank Lloyd Wright's Buffalo on Wednesday, April 15, at 9 p.m.

Produced by Paul Lamont for WNED, this outstanding documentary tells the story of Frank Lloyd Wright, Darwin D. Martin, and the extraordinary architectural products of their long association - one of the greatest patronage relationships of Wright's career. With the narration of David Ogden Stiers and gorgeous cinematography, this is truly "must see TV."
Posted by EJF at 3:32 PM No comments: Links to this post 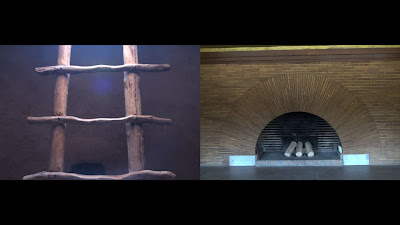 Lost Horizons, an exhibition by artist Letha Wilson that opens at Buffalo Arts Studio this Saturday, April 4, 7 - 10 p.m., includes artwork developed using a range of materials and techniques, from video to installation, photography to sculpture and collage. Several works have been created specifically for this exhibition, including a new video and a site-specific architectural structure. Issues related to travel, conservation, natural materials, and modern architecture and design are referenced in works that invite the viewer to participate in the journey. Wilson uses imagery from the outdoor environment in tandem with sculptural elements to create works that intertwine nature and modern architecture.

The two-channel video projection Double Buffalo Western mirrors walks through Buffalo Arts Studio and Frank Lloyd Wright’s nearby Darwin Martin House with walks taken in rural New Mexico. The architecture of the Buffalo spaces is used to guide walks out in the open wilderness. Inversely, walks taken in the Southwest using both the natural geography of the region and historical cliff dwellings are traced back in the gallery space. The video creates links between these different places, and gives the viewer the sense of being in two places at once. Similarities and differences between the two sites are brought to light, while not placing either site in a hierarchy over the other. 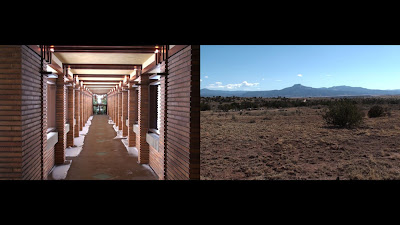 Of the video pieces in the exhibition, Wilson commented that "one walk mirrors the Martin House pergola with footage from Ghost Ranch, in New Mexico (where Georgia O'Keefe lived and worked for many years, actually the mountain in view she painted many times over), and the second image is linking a walk inside a circular kiva in a ancient cliff dwelling at Bandelier National Monument in New Mexico to the Martin House reception room."

Don't miss this exhibition of intriguing work in a variety of media - inspired, in part, by the Martin House - at the nearby Buffalo Arts Studio (Tri-Main building), on view through May 22.

Interpretive text and photos courtesy of the artist and Buffalo Arts Studio.

Posted by EJF at 3:04 PM No comments: Links to this post