by EJF
The Martin House, which has been relatively free of contractors for the past year, is once again an active construction zone:  Phase Five of our unprecedented restoration effort - the restoration of the Martin House interior - is under way!
The first major task in this phase was to remove all in situ art glass for its protection and conservation while other, messier work is orchestrated.  On Monday, a team of workers from Hulley Woodworking Company fanned out across the house to remove twenty-seven art glass windows, crate them, and re-glaze the openings with temporary, plate glass.  From there, the crated panels were transported to our secure storage facility, where they will be released, one by one, to a stained glass craftsman for conservation.  Our goal is to have the majority of this glass restored by the time the other major components of Phase Five - asbestos removal, mechanical upgrades, woodwork restoration and reconstruction - are complete and the house is ready to receive its resplendent compliment of art glass.
This process of art glass removal afforded a unique opportunity:  the near-total opening of the double cantilevers at the north and south bedrooms of the second floor.  For a short time (perhaps less than an hour), these corners were literally open to the outdoors, emphasizing the miraculous structural sweep of the cantilevered roof corners, and the ephemeral nature of the art glass bands that form the envelope of enclosure for the space.  Looking out onto the east lawn with a light rain falling, I felt the sense of standing on an elevated, skeletal pavilion under a broadly sheltering roof plane.  In that moment, I didn't miss the beautiful "Tree of Life" windows that once defined the space - and I got a glimpse of how and why Wright eliminated art glass altogether from his later designs. 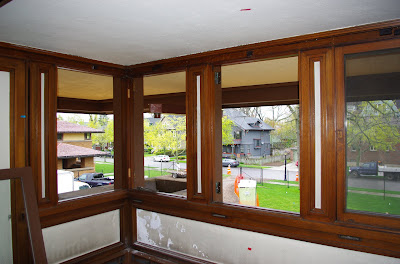 Coming Soon to a Martin House Near You: The Junior League / Buffalo News Learning Center 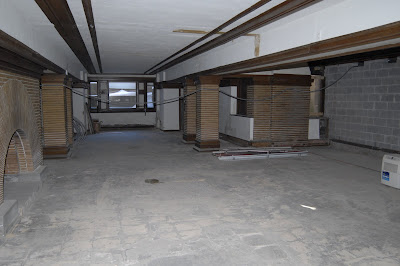 Posted by EJF at 3:10 PM No comments: Links to this post

It's in the Bag

Here's a shameless review of a field-tested product from the Wisteria Shop at the Martin House Complex: 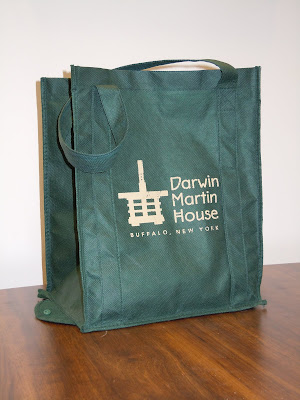 Those cloth-like, fold-able green bags featuring the stylish Martin House birdhouse graphic are for more than just groceries or paperwork (Mary Roberts, take note);  they're great for toting all manner of summertime and beach accoutrements.  Take it from me - I used one of the bags recently on my Spring Break trip to Mexico.  They fold up into a compact package that's easily tucked into a small suitcase, and they're lightweight but tough enough to hold your towels, sunscreen, Frisbee...even that trashy paperback.  And, after you've accumulated a few treasures on vacation - be it seashells or a hand-painted coconut lamp - you can use the tote as a durable and flexible carry-on for the return trip.

No, it doesn't double as a flotation device, but I think that the Wisteria Shop R&D Department is working on that.
Posted by EJF at 4:21 PM No comments: Links to this post

By Jim Koenig, Steak Sandwich and Furniture Aficionado
Architecture and Design scholars have long known of the collaboration between Frank Lloyd Wright and George M. Niedecken, but attributing some works to one designer or another has been a difficult task. Niedecken was a Milwaukee-based “Interior Architect” in the Arts & Crafts style. Early in each of their careers, the two men crossed paths, the earliest meeting documented as the showing of their individual work at an exhibition of the Chicago Arts & Crafts Society in 1898. Niedecken was subsequently employed, in various capacities, by Wright from 1904 through 1918 at his studio. Collaborative commissions on everything from furniture design to murals were completed for prominent Prairie houses such as Coonley, Robie, May, , and Bock. 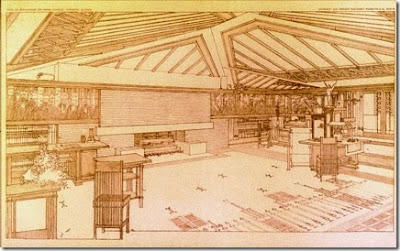 Presentation drawing for the Living room of the Coonley House from the Wasmuth portfolio, 1911.
At the Martin House, we have been exploring the possibility of collaboration between Wright and Niedecken on interior furnishings and décor. Because of the Warhol-like “Factory” arrangement of Wright’s studio, it is often hard to attribute a design or idea to anyone other than Wright, who absorbed the credit for all commissions. However, the Niedecken-attributed designs at Prairie houses contemporary to Martin, paired with his employment by Wright during the furnishing of the house suggest a possible collaboration between the two designers on aspects of the commission.
While we may never be sure what Niedecken’s involvement was at the Martin House (if any), designs for subsequent commissions can lead us to substantiated inferences. Two excellent publications on Niedecken by Cheryl Robertson (Frank Lloyd Wright and George Mann Niedecken – Prairie School Collaborators and The Domestic Scene, 1897-1927: George M. Niedecken, Interior Architect) have drawn some important parallels for us. Niedecken’s art glass designs for the Henry Harnischferger House in echo the efflorescent “pots” of Wright’s “Tree of Life” windows. Also, his work with Wright on a library table for the Bock house illustrates a logical progression to the table designed for the Martin’s residence.
With further research and documentation, the architectural museum of the Martin House might one day bear the name George Mann Niedecken along with Frank Lloyd Wright.
Posted by EJF at 11:48 AM No comments: Links to this post

Mori in the Buffalo News [HERE] 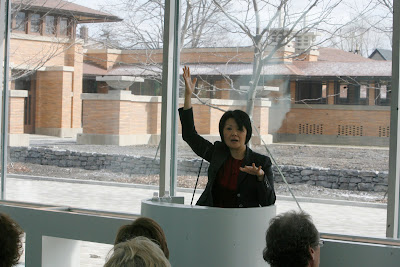 Posted by EJF at 4:07 PM No comments: Links to this post

Nice Building, but How Does it Sound?

Browsing the treasures offered in the silent auction at the Frank Lloyd Wright Building Conservancy conference last fall, I was drawn to a set of metal file cabinets from Frank Lloyd Wright's Larkin Administration building, and it hit me:  a little insight into how the building sounded.  Hundreds of these built-in metal file drawers opening and closing every few minutes... hundreds of manual typewriters click-clacking away... an industrial chorus or cacaphony, depending on your point of view.

The donor of those Larkin cabinets, Jack Quinan, will speak on the topic of The Soundscape of Frank Lloyd Wright's Larkin Building tonight, April 1 (no foolin') at 7 PM in the Eleanor and Wilson Greatbatch Pavilion.  Quinan will draw on his recent research into the phenomenological aspects of this early modern icon.  Don't miss this opportunity to gain new, unique insights into the character of one of Buffalo's lost architectural masterworks.  Sound good?
Posted by EJF at 1:06 PM No comments: Links to this post