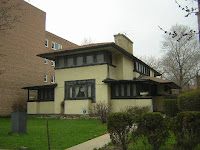 Although they have slowed considerably in the last few decades, threats of extinction for Wright buildings are not a thing of the past. Landmarks Illinois 2009-10 Chicagoland Watch List of endangered buildings includes three Wright houses: the J. J. Walser House (1903), the William F. Ross House (1915) and the William J. Vanderkloot Bungalow (1915). The Walser House may ring a bell for Martin House fans: it's the model that Wright and the Martins chose for their first project, the George and Delta Barton House (1903-04). Walser is privately owned, but badly in need of TLC, enough to make Landmarks Illinois' endangered list.

The three Wright buildings on the list are joined by the distinctive Rose House and Pavilion by architects James Speyer and David Haid. Both studied with Mies van der Rohe at ITT, and his influence is manifest in these International Style icons. The house and pavilion are less

threatened by neglect than the Wright houses are, but perhaps more threatened by the market: the property is currently for sale via Sotheby's for a cool $2.3 million, and inquiries have been made about possible subdivision or demolition. This property will look familiar to fans of the 1986 John Hughes comedy Ferris Bueller's Day Off, as the auto pavilion figured prominently into a pivotal scene involving a classic Ferrari and alot of broken glass.

If only the Walser House could claim such fifteen minutes of Hollywood fame, it might be in better stead today (insert heavy sigh).
Posted by EJF at 9:40 AM 1 comment: Links to this post

And Check the Oil Please

By Ashley Takacs, extra-special to the Weekly Wright-Up

The 20th century saw the advent of the automobile and the Martin House witnessed this revolution, with Darwin D. Martin buying his first car - a Maxwell one-cylinder runabout - soon after the completion of the Martin House complex in 1907. And with all of those cars came the need for new building types: the garage, the toll barrier and of course, the gas station.

As a new building typology, the gas station served as a playground for modernists who were looking to test their latest design principles. Plus, with their simple space requirements and focus on innovative roof structures, the stations left a lot of room for creativity. Unlike today’s standard Mobil station (its enduring design courtesy of Elliot Noyes), early stations were as diverse as they were functional. Mies Van der Rohe, Norman Foster and of course Frank Lloyd Wright all put their own spin on the pump. The design blog, OObject has collected the best of the best in its list of the world’s top 15 modernist gas stations. Wright’s R.W. Lindholm Service Station in Cloquet, Minnesota came in at number eleven. Wright’s signature cantilevers mark this work and no doubt have influenced contemporary stations. Sadly, the Cloquet station, currently for sale at $750,000, is in a state of disrepair. 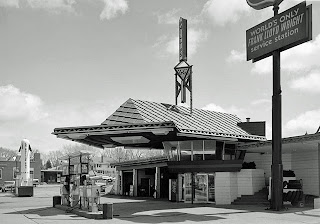 Perhaps Buffalo’s Wright-designed filling station, set to start construction next spring, will make OObject's list. The unbuilt 1927 design includes period innovations like a ladies' room (so women would not have to use the greasy mechanics' bathroom) and gravity-fed gasoline hoses dangling from a cantilevered roof. The second floor features a waiting room with built-in seating. The structure will serve as the centerpiece of the Buffalo Transportation/Pierce-Arrow Museum. In fact, the station, initially intended for a site on the corner of Michigan Avenue and Cherry Street, will be erected entirely indoors, where guests can enjoy it year-round, protected from the harsh Buffalo winter. In an inadvertent nod to current "green" trends, there will be no functioning gas tanks in the structure. While automobile enthusiasts will certainly get their fill of history, they will have to go to the local Mobil or Sunoco to fill their tanks.
Posted by EJF at 1:08 PM No comments: Links to this post

By Ashley Takacs, special to the Weekly-Wright-Up

After sustaining myself for months on New York Times slideshows and various design blogs, I finally got to live out my architecture-geek fantasy and walk the Highline in person. When friends heard of my plan, they feared I had joined a circus troupe or some kind of Johnny Cash tribute band. And while all that sounds rather exciting, my weekend in New York City was far more benign. In fact, it was merely a walk in the park – the Highline Park, to be more specific. 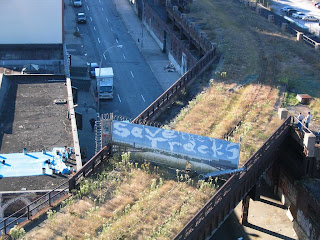 If they had been reading The Weekly Wright-Up, my friends would have known that the Highline is a park built on an abandoned elevated railway that once supplied meatpackers and manufacturers on Manhattan's West Side. Designers Diller Scofidio + Renfro integrated everything from the old tracks (which now host rolling chaise lounges) to the wildflowers growing among the rusted railroad ties.

The Highline’s rampant success (the media darling sees 20,000 visitors daily, among them Kevin Bacon, Ethan Hawke and Edward Norton) proves that modern cities can embrace their industrial heritage and promote sustainability, all while pleasing tourists, crabby locals and the haughtiest of architecture critics. But, as Buffalonians, it’s hard not to feel just a little left out. New York, it seems, is like the sibling who always gets the new bike for Christmas, while Buffalo get’s shafted with a pair of socks (hand-me-downs no less).

With its vibrant industrial past, the Queen City is primed for such a project. As someone who has grown up in the shadow of the derelict Wurlitzer building, Buffalo’s myriad industrial relics have always managed to capture my imagination (In fact, I’ve always dreamed of living in a grain elevator).

It turns out that I’m not alone in my fascination. Last March, I read an article buried on an inside page of the Buffalo News about Ran Webber. Webber imagines the Buffalo Skyway creatively re-engineered to function as a signature green multi-use mega-structure, complete with a glass enclosed green roof and pedestrian pathway – sound familiar? The design would effectively create a year-round garden path from downtown to the lakefront. Sadly, such repurposing of the Skyway has gotten little press since that article 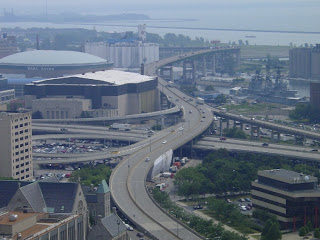 Perhaps with the Highline’s recent success, local developers will feel inspired to take the plunge. But, unlike the Highline, which had the luxury of celebrity boosters and a location in an already thriving district, the Skyway project’s risk is amplified by the fact that Buffalo is hardly booming. The stakes are greater here, but so are the rewards. Developers would be building more than a park in a swank neighborhood; they would be embarking on a project with the potential to help bring a city back to life.

See the new Fall Arts preview issue of Artvoice for a preview of Jack Quinan's exhibition "Frank Lloyd Wright's Buffalo Venture: From the Larkin Building to Broadacre City," coming to the UB Anderson Gallery in October.

Posted by EJF at 2:55 PM No comments: Links to this post

Read the Book - Don't Wait for the Movie

Here's a confession: the following constitutes a shameless plug. 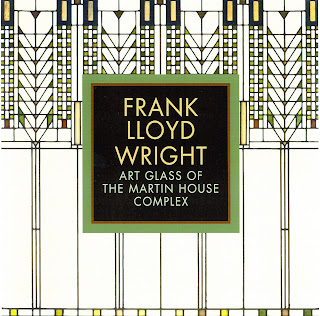 Upon returning from vacation last week, I found the first advance copy of Frank Lloyd Wright Art Glass of the Martin House Complex waiting on my desk, straight from the publisher in California. Our new book on the art glass of the Martin House Complex, this is the first Martin House-specific publication since Jack Quinan's Frank Lloyd Wright's Martin House: Architecture as Portraiture (Princeton Architectural Press, 2004). It celebrates the ten-year anniversary of the exhibition "Frank Lloyd Wright: Windows of the Darwin D. Martin House" at the Burchfield-Penney Art Center, drawing on some of the excellent text from the show's catalog, expanding the array of art glass illustrated and interpreted, and adding new, scholarly text in a stand-alone, hardcover book. The publisher, Pomegranate, beautifully designed, printed and bound this content into a handsome package.

Soon after I started as Associate Curator for the MHRC in 2003, I began to feel the need for more comprehensive documentation of the fascinating art glass created for the Martin House Complex. Then Executive Director John Courtin posed a seemingly innocent question to me: where did the term "Tree of Life" window come from - and when? This lead to a rapidly growing file of minutiae pertaining to the famed motif, and a growing obsession with getting to the bottom of John's question. Although I have not yet found the "smoking gun" in the case of the "Tree of Life" moniker, new insights on the function and meaning of the motif emerged, forming the basis of an essay that I contributed to the book.

From the outset, it seemed that this book was meant to be. First, Pomegranate, which has a growing catalog of Frank Lloyd Wright titles, signed-on as publisher. Next, we received a generous grant from the New York State Council on the Arts to support research and production of the book. This helped fund additional photography by Biff Henrich, needed to expand the catalog of art glass illustrated. Adding to the many photographs that he made for the 1999 catalog, Biff produced a number of skillful "portraits" of art glass not previously documented. All the contributors to the Burchfield-Penney catalog - Jack Quinan, Ted Lownie and Robert McCarter - were happy to allow their essays to be reprinted, some taking the opportunity to make revisions. Noted art glass expert Julie Sloan came on board to write an introduction, and Oakbrook Esser Studios, A-list artisans who produce exacting reproductions of Wright's art glass designs, collaborated on an interview to conclude the book.

I'm delighted that the final product seems to strike a balance between scholarly depth and coffee-table appeal. I can't thank all of the collaborators enough - from the Frank Lloyd Wright Foundation Archives to Lesley Neufeld and Bernie Wagner. I hope you'll agree that the resulting book will make a fine addition to your Frank Lloyd Wright library.

Frank Lloyd Wright Art Glass of the Martin House Complex is not yet available to the general public, but we expect to have a supply in the Wisteria Shop by mid-September, and you may order the book through a special pre-publication offer; visit the MHRC website for an order form, or call the office at (716) 856-3858.

Posted by EJF at 5:11 PM No comments: Links to this post