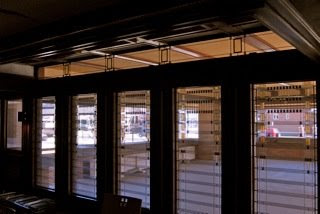 Thanks to the expert installation skills of Martin House Lead Cabinetmaker Steve Oubre, the incredible transom art glass panel is now in place at the living room / veranda junction.

The effect from inside the living room is remarkable: the clear plate glass that makes up the majority of the composition all but disappears, giving the illusion that the long lines of caming and rhythmic squares and rectangles of green and gold art glass are floating above the veranda doors by virtue of some miraculous force. The effect from the veranda side is somewhat different: the iridescence of the exterior face allies the transom to the glittering glass membrane of the east living room elevation.

The MHRC staff is working on securing funds to complete the full array of art glass in the living room east alcove, including four side windows of the "wisteria" pattern, and the five-panel skylight overhead. Stay tuned as the pieces of this art glass "puzzle" fall into place.

[photo courtesy Dick Burns, LP Ciminelli]
Posted by EJF at 11:58 AM No comments: Links to this post

Art Glass, by the Yard 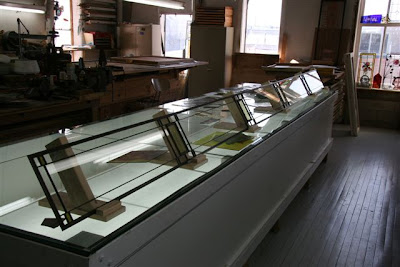 This Thursday, the MHRC took delivery of a truly extraordinary piece of art glass: the nearly sixteen foot long transom for the east alcove of the Martin House living room. To be precise, the panel is 190 by 10 inches, by far the longest piece in the Martin House complex, and most likely in all of Wright's work in art glass.

The original transom panel has been lost to history, documented only in a few of the Fuermann photos of the living room. It does not readily announce itself in these images, given its location, but portions of it are visible in a few of the photos.

The transom was instrumental in creating the illusion that the living room space continued to the east through a permeable screen of art glass to the semi-enclosed, outdoor space of the veranda. The panel is composed largely of clear plate glass, with colored squares and rectangles found only at the tops of the inter-door jambs. The colored glass rectangles that align with the jambs are akin to the "pots" found along the bottom of the "Tree of Life" windows. The simplicity of the transom design as a whole is illustrated by the total pieces of glass: only 69 (versus more than 750 in a typical "Tree of Life" window).

This reproduction transom was made by Oakbrook Esser Studios of Oconomowoc, Wisconsin - the workshop that has already produced a number of exacting reproductions for the Martin House, including the large doors at the pergola / conservatory juncture and the "wisteria" doors immediately below the transom. Oakbrook Esser is the official art glass licensee of the Frank Lloyd Wright Foundation, creating impeccable reproductions of Wright's challenging designs.

The transom will soon be installed by MHRC Lead Cabinetmaker Steve Oubre, bringing the east alcove of the living room one giant step closer to completion.
Posted by EJF at 4:18 PM No comments: Links to this post 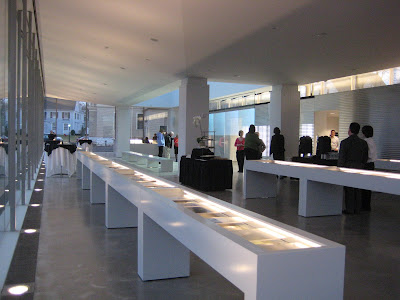 With the curtain going up on the new Eleanor and Wilson Greatbatch Pavilion opening this week, the architect, donors, patrons, board members, foundation representatives, Martin House leaders and media have all weighed-in on this incredible new building; it feels like it's all been said. So I submit, for your consideration, my Top Ten coolest things about the Greatbatch Pavilion, from the sublime to the ridiculous (roughly in that order): 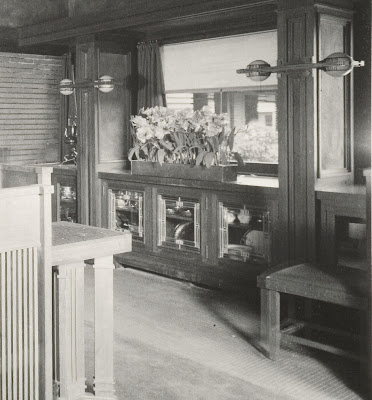 Despite detailed (and accumulating) documentation on the nearly 400 pieces of art glass in the Martin House complex, certain mysteries remain. A short list of locations presumed to have art glass, but not well documented in photographs or by other means, remain in the realm of speculation. One such open question concerned the bank of cabinets on the north and south termini of the unit room - the built-in storage under the "Chicago" window arrays in the dining room and library.

It has long been obvious that the three center doors in each of these arrays were graced with a simple art glass pattern; the art glass appears clearly in the Fuermann photo of the dining room (1907), and it stands to reason that the same condition would have existed in the analogous doors seventy feet away in the library. For that matter, a few of these cabinet doors preserved in collections today (at the Hunterian Museum and Art Gallery, Glasgow, the Maltwood Art Museum and Gallery, Victoria, BC and Martin House collection) leave no doubt concerning the original condition of the center doors. The nature of the four pairs of narrower cabinet doors on the ends, however, was not as obvious. Did they have the same pattern as the central trio? Or were they a variation on that theme? Or clear plate? As is often the case, the answer was right under our noses: in a high-resolution version of the Fuermann dining room photo, you can clearly see that there's no caming in the two visible portions of these narrow, end doors. Thus, appearances indicate that these doors were clear plate glass. 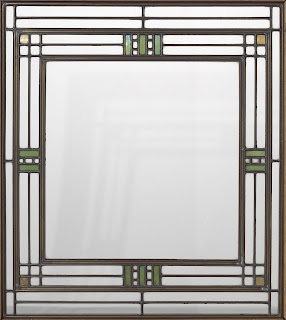 A recent conversation I had with restoration architect Ted Lownie confirmed this observation. He pointed out that there's a certain logic to the array, if you consider the comprehensive elevation at the termini of the unit room: where there is art glass above in the "Chicago" window, there is no art glass below in the cabinet doors, and vice versa.

Mystery solved? Probably...unless someone finds a narrow cabinet door in the same art glass pattern. Check your attics and basements, folks.
Posted by EJF at 9:24 AM No comments: Links to this post