According to today's New York Times Former Met Keith Hernandez Shaves His Mustache for Charity - NYTimes.com. The popular Mets baseball star of the 1980s is linked in the article to such mustachoied figures of the past as Clark Gable, William Howard Taft, Thomas E. Dewey, and Groucho Marx, but alas, not Darwin Martin of Buffalo. There's a story here:

Following the death of his mother in 1872 Darwin Martin spent seven arduous years on the Nebraska frontier before venturing off on his own at age 13 to sell soap on the streets of New York. Bright and ambitious, he was soon brought to Buffalo to assume the position of bookkeeper to the Larkin Soap Company. Darwin threw himself into the work with all his energy and might, but lonely and depressed he assuaged his feelings by keeping a diary and writing frequent lengthy letters to his father and four scattered siblings. In an effort to help, his sister, Delta, arranged for him to correspond with a slightly older cousin, Belle Crouse, in Memphis, New York. Darwin's letters to Belle Crouse reveal him to be needy,  chatty, and boastful about his position in the Larkin Company. On March 23 ,1881 he wrote: "I have got to look up a new boarding house before long, don't you pity me?" And on June 3, 1881 he enclosed a photograph of himself in a letter with this comment: "I will put that long looked for photo in the letter. I am ashamed of it. It looks as though I was mad when I had it taken but I was not, that is the way I always look unless I am mad and then I look ten times worse than the picture. Now aren't you ashamed of your cousin?"


It is difficult to look at that picture and not read into the downward turn of his mouth a reflection of the sadness of his life up to that time -- his mother gone, his father in Nebraska, his siblings far away, his boss, John Larkin, a distant, quiet man, his best friend, Dan Robbins, killed in a train accident, and Darwin alone in a dismal boardinghouse. As soon as he was able, Darwin Martin grew a substantial mustache that covered much of his mouth quite fully, and unlike Keith Hernandez, he never shaved it off.
Posted by Unknown at 10:31 AM 2 comments: Links to this post

NO WAY TO OPERATE?

Sometime in 1975 word circulated that officials the NY State Department of Health had toured the Darwin D. Martin House in order to assess its suitability as a half-way house for mental patients. A meeting was called by interested preservationists that caused Robert Ketter, President of the SUNY Buffalo (owner the house), to declare it the university's Canadian-American Center. He also appointed Lorelei Z. Ketter, his wife, and me as co-chairs of a committee, the Friends of the Darwin Martin House, to raise restoration funds. Neither of us knew much about the business of raising funds but we barged ahead, created a tour of Wright buildings in Buffalo, and raised a total of about $8,000 in a few years. With some of  these funds we had the sagging eaves of the east porch reinforced. Then the tile-topped concrete slab of the entrance porch collapsed because the reinforcing metal mesh was too near the bottom face of the slab.  As the photograph shows we were very "hands on" as co-chairs. But no, contrary to popular myth, we didn't use bake sales. 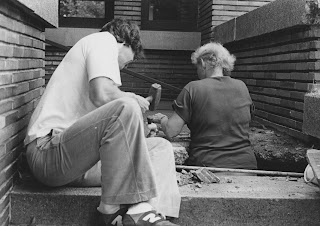 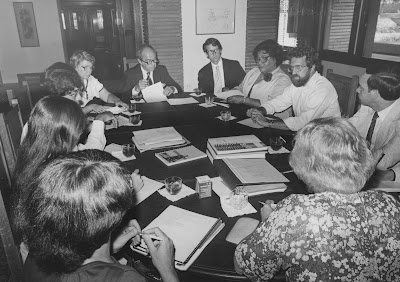 Our efforts were rather short-lived as Robert Ketter stepped down as president of the university in 1981 and was succeeded by Steven Sample who promptly turned responsibility for the Martin House over to the Dean of the School of Architecture and Planning where it languished for the next twenty years. This is not to castigate those deans because, as we used to say, the university was not in the business of historic preservation. However, under William Greiner, who became the university president in 1991, the Martin House Restoration Corporation was formed and the present restoration campaign got underway. But that's another story, a triumphant one.
Posted by Unknown at 9:22 AM 4 comments: Links to this post


My son, John, was an avid watcher of Sesame Street during the 1970s so when Edgar Tafel's Apprentice to Genius: Years with Frank Lloyd Wright was published in 1979 the photograph of Wright by Pedro Guerrero on the back cover of the dust jacket (see below) immediately caught his attention: "Dad, he looks like Dracula!" (a reference to the Sesame Street character Count Dracula).  Shortly after the book came out Edgar Tafel, a former Wright apprentice, was in town for a meeting at the Martin House and asked me to drive him to the Buffalo airport to pick up Pete Guerrero who had been commissioned to photograph a set of Wright drawings belonging to architect-collector, Jack Randall. Once Pete was in the car the conversation quickly turned to Tafel's new book. Pete: "I see you used the Dracula shot for the back cover." (!)  Tafel (chuckling):  "Of course!"   John was vindicated.


Pete Guerrero was known throughout Wright circles an extraordinarily kind man. When I was preparing an article on Wright and photography in the 1980s Pete took a train from New Canaan, Connecticut, into Manhattan on a Saturday morning, talked to me for several hours about his experiences with Wright -- a treasury of insights -- and promptly hopped a train and returned to New Canaan.

Our sympathy goes out to Dixie and the rest of the Guerrero family.
Posted by Unknown at 12:57 PM No comments: Links to this post

Please note that the estimable Jack Quinan has assumed the role of Editor-in-Chief of the Weekly Wright-up, but for reasons unknown, those who receive email reminders still see my name attached to them.  This is causing a good deal of confusion, so I thought I'd check in just to say that, even if you get an email that appears to be from me, the information it contains pertains to Jack.  Kudos to him for his foray in to the blogosphere, and for his new book!

A NEW BOOK AND AN OLD FRIEND

Board members, colleagues, staff, and friends gathered at the Martin House on September 4 to bid farewell to John C. Courtin, who more than any other individual, in his capacity as Executive Director of the Martin House Restoration Corporation, brought the six-building Martin House complex to its present state of restoration and reconstruction. Through an enviable combination of keen, absorptive intelligence, endless energy for work, and an ever cheerful demeanor, John has had an indelible impact on the city of Buffalo. We will miss him and Sharon, his wife. 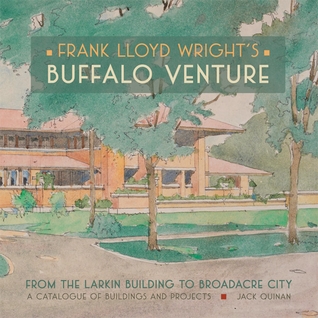 Pomegranate Communications, Inc. in San Francisco has just released my book, Frank Lloyd Wright's Buffalo Venture: From the Larkin Building to Broadacre City. Following monographic studies of Wright's Larkin Administration Building (1987) and Frank Lloyd Wright's Darwin Martin House (2004) I decided to write an essay and catalogue all  twenty-four of the buildings and projects that resulted from Frank Lloyd Wright's involvement with his Buffalo clients between 1903 and 1935. The project resulted in an exhibition at the UB Anderson Gallery in Buffalo in 2009 timed to coincide with the Annual Meeting of the Frank Lloyd Wright Building Conservancy in Buffalo. I am pleased with Pomegranate's fine production and I would like to thank all of those many people who helped to make it possible.
Posted by Unknown at 10:03 AM No comments: Links to this post

"HOW TO LIVE IN THE DESERT"

Anyone who cares a whit about Frank Lloyd Wright should jump at the chance to sign the petition (14,000 and rising) [google: Petition/ CITY OF PHOENIX: Save the David and Gladys Wright House],from destruction. The house is a dazzling performance from those later years when Wright engaged the vexatious form of the spiral, but it also represents a touching gesture to a son from a father who wrote in his autobiography: "The architect absorbed the father in me... Is it a quality? Fatherhood? If so, I seemed born without it. And yet a building was a child. I have had the father-feeling, I am sure, when coming back after a long time to one of my buildings.That must be the true feeling of fatherhood. But I never had it for my children."

Pedro (Pete) Guerrero, Wright's personal photographer, tells of going to David Wright's house with Wright to photograph it for House Beautiful magazine in 1955. Apparently they were not then welcome inside the house so Pete set up his camera at the edge of the property. Wright decided, however, that the shot would look better if some of the vines above the living room were adjusted, so he scampered up onto the roof (never mind that he was 88) to fix them. From a chair in the living room David noticed that the shaking vines and went out and -- according to Pete -- threw his father off the property. There must be more to this story.

Wright lived to be 91, David Wright died at 104, and Pete Guerrero is still going strong in his nineties. Surely the house will endure if you help.
Posted by Unknown at 3:08 PM No comments: Links to this post