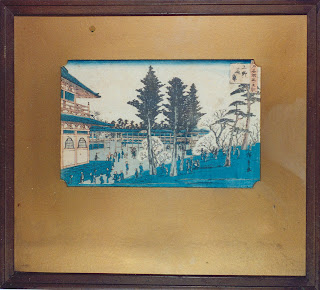 I recently returned from a trip to Florida, where I met with Martin family descendents in the Tallahassee area and followed up on some long-standing leads on family artifacts. Mark Armesto, son-in-law to Darwin R. Martin, welcomed me into his home in Havana, FL (largely spared by tropical storm Fay), where I also met Alex Martin, Darwin R. Martin's son.

Mark presented the MHRC with this beautiful Japanese woodblock print, passed down from his father-in-law to his late wife, Pattie Martin Armesto. Its original location in the Martin House is yet to be determined, but there's no doubt that it was part of the Martins' complement of prints obtained through the auspices of Wright.

Mark also gave us a copy of the booklet "The First to Make a Card Ledger / The Story of the Larkin Card Indexes," by Darwin D. Martin (1932). The booklet tells the story of the innovative Card Index system, first developed at the Larkin Company. Martin was evidently proud of this major contribution to the history of business systems, writing "...I think the card-ledger was born in the Larkin office, and the fact deserves its honored place in future encyclopedias."

I had an intriguing conversation with Alex Martin, who related a number of anecdotes about his father, Darwin R. Martin. One of the most amusing involved the discovery of a case of Civil War era whiskey (complete with Confederate trademarks) under the floorboards of a former Pony Express depot behind the former Stuyvesant Hotel. The final disposition of the finely aged spirits is lost to history... 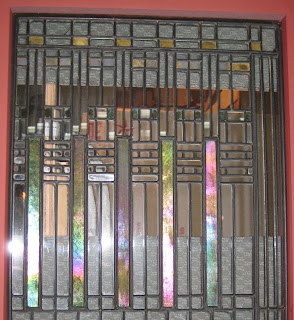 From Tallahassee, I drove down to the Orlando area to make an eyewitness inspection of the original Martin House dining room buffet doors held by the Charles Hosmer Morse Museum of American Art, Winter Park [www.morsemuseum.org]. Collections Manager Jennifer Thalheimer allowed me to "commune" with the impressive art glass doors, and later gave me a wonderful insider's tour of the Morse Museum collection which features the work of Louis Comfort Tiffany. The doors are finely preserved examples of Wright's interior art glass for the Martin House, and access to them is crucial to our long-term restoration efforts, as this is the only known example of this particular pattern. For enthusiasts of Turn-of-the-Century American decorative arts, the Morse is a must-see.

Upon my return to Buffalo, Mark Armesto had another surprise in store. He found in his collection an award - in the form of a large, engraved silver cup - to Darwin D. Martin from the Larkin Company, given upon Martin's retirement in 1925. The inscription reads: The Directors of Larkin Co. Inc. to Darwin D. Martin, with affectionate appreciation of his valuable services to the company for forty seven years, and as Director and Secretary. Mark thought that this award should be added to the Martin House collection as an impressive piece of Martin family history.

Who needs a gold watch anyway?
Posted by EJF at 3:28 PM

This blog is a wonderful addition to the Martin House site - great to read details about the artifact search and personalities involved. Happy Hunting!