To the Enjoyment of All: The Martin Family Book Collection

As many followers of the Martin House well know, Darwin D. Martin was a voracious reader and a self-taught man whose collection of books numbered in the thousands. Considering that he was the kind of man who recorded his height and weight on a regular basis, Martin’s diary is replete with pithy notations on what he had begun reading, what he was finishing up, who he was reading to (which was his wife Isabelle most of the time due to her failing eyesight) and even where he was reading: Martin didn’t even waste time on train cars when riding into the city of Buffalo for work.

Of some 2,000 books in his collection, Martin recorded only 42 titles over a 47 year period in his diary; however, one could consider the titles he mentions a kind of cross-section of the literature he was reading, both for himself and aloud to his family and friends. For the most part, Martin chose to read classic works of fiction, autobiographies of religious subjects and individuals, local histories and Christian Science texts. He also writes later in life that Isabelle has a particular fondness for Dickens, which explains the multitude of the author’s work in their collection. If a certain tome struck a particular chord with Martin, he was sure to make note of it, however brief. He considered in 1906 Tolstoy’s My Religion to be “the greatest book I ever read,” while in December of that year Martin read a rather obscure book on the train - The Parochial School by Jeremiah Crowley, which he described as a “…book on esoteric Catholicism…which greatly moved me.”

Martin also seemed to enjoy reading aloud, both to his wife and particularly to his son, Darwin R. The senior records several instances in which he and the boy read together. As to be expected, these were mostly adventure stories, such as Kipling’s Captain’s Courageous and Richard Dana’s Two Years Before the Mast, which took father and son over a year to complete. In 1915, he read his son Reverend Kellogg’s Lion Ben of Elm Island, of which Martin proudly claims “He enjoys as I did when a boy.”

The Martins were a literary family in general. Many of the photos in the Martin House collection feature family members reading in quiet repose. Also, Mrs. Martin was a charter member of the Highland Park Literary Club (a sort of literary salon) which often met in the Martins’ home. As Darwin D. and Isabelle get older, records more and more instances of his reading aloud to her – including some of her favorite Dickens, such as Little Dorrit and David Copperfield, which they read at least twice during their life together.

Indeed, books seemed to remain a comfort and a source of knowledge to Martin even in his last days. One of the last entries in his diary in the months before his death, between the stubborn recordings of day-to-day minutiae, is the entry of : “Finished ‘Within This Present,’ story of present depression.” 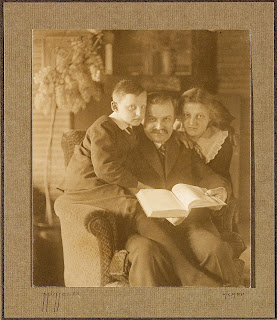