Wright and the Workplace

by Ashley Takacs, Assistant (to the) Regional Manager 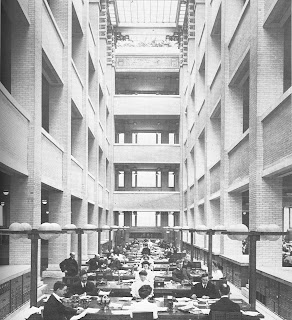 While as a college senior I have yet to experience office culture personally, I hope to join the ranks of the gainfully employed soon (fingers crossed). And, seeing that this is officially ‘Boss’s Day,' I thought it appropriate to look at the evolution of the modern American office building. It turns out that Frank Lloyd Wright and our dearly demolished Larkin building have an important place in this history.

In fact, many cite the Larkin Administration building (, 1904) as the first modern office building. Just as Wright championed the open floor plan in his houses, he took the corporate world by storm by breaking down the walls that divided workers in traditional offices. The Larkin building’s innovative plan directed all service spaces to the corners, leaving a large atrium in the center. Unlike his prairie homes, which reached out in to the landscape, Wright’s public and office buildings - from the Larkin building to to the Johnson Wax building - were more insular. They fostered a sense of fellowship by establishing a virtually windowless perimeter. In the Larkin building, views out were limited to glimpses of the sky through high windows, creating an introverted sense of the company as a family dedicated to the ‘sacrament of work,’ as emphasized by the salutary inscriptions around the galleries.

To keep the interior space free from the pollution of passing New York Central trains, the building was hermetically sealed and provided with one of the first primitive air-conditioning systems. Wright’s attention to integrated detail extended to the design of the steel furniture, the first ‘system’ furniture and the built-in cabinets that lined the walls.

Years later, Wright would ruminate on the significance of the Larkin building, not only to his career, but to the way that companies organized themselves:

“It is interesting that I, an architect supposed to be concerned with the aesthetic sense of the building, should have invented the wall-hung for the w.c. (easier to clean under), and adopted many other innovations like the glass door, steel furniture, air-conditioning and radiant or 'gravity heat.' Nearly every technological innovation used today was suggested in the in 1904.” (An American Architecture, Edgar Kaufmann, Ed.). 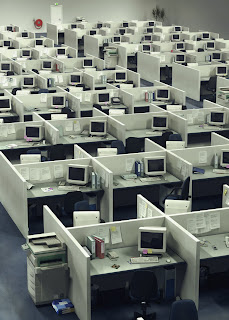 For better or worse, Wright's innovations led to the advent of the cubicle in 1965 (Robert Propst, the inventor of the cubicle, has since apologized for his often bemoaned creation). Despite this retraction, the cubicle farm has become synonymous with modern offices and has been enshrined in American popular culture through films like "Office Space" and the beloved comic Dilbert. But before we blame Wright for these unsightly office mainstays, remember that cubicles re-erected the boxes that Wright worked so hard to break. So perhaps when you give your employer his or her fruit basket this 'Boss Appreciation Day,' ask him or her to get rid of the cubicles in honor of Frank Lloyd Wright.

Your blog content is exactly what I need, I like your blog, I sincerely hope that your blog is a fast-growing traffic density, and to help promote your blog, we hope you blog updates and place can always be colorful.direct office solution