Greatbatch Pavilion Honored by the AIA 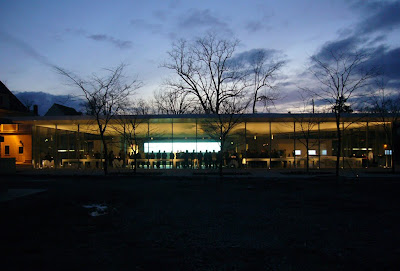 Toshiko Mori Architect's Eleanor and Wilson Greatbatch Pavilion was the recipient last night of a 2009 Design Award from the American Institute of Architects Buffalo / WNY Chapter.  Already celebrated by the media, this project can now add to its laurels recognition in the "New build under 25,000 square feet" category from this prestigious, professional organization.  The jurors' comments invoke what made the Greatbatch Pavilion stand out among the other entries in this category:


This is perhaps the only building we reviewed that wanted to recede into its context and pay homage to a greater presence.  The pavilion focuses the visitor on the matter at hand - the Darwin Martin Complex.  The language represented in the design seems to respect and offer a tip-of-the-hat to many of the 20th century's great architects, while the reflections in the almost invisible glass envelope redirect our attention back to Frank Lloyd Wright's work.

The MHRC is delighted that the Greatbatch Pavilion is among such esteemed company, and thanks the AIA for its recognition of this inspiring new addition to the Martin House campus.
Posted by EJF at 3:02 PM