Many in the Wright-o-sphere will have heard by now of the tragic vandalism suffered by Wright's Unity Temple in Oak Park last week.  Apparently, the perpetrator accessed the central skylight via construction scaffolding, and dropped a sealed bucket of tar down into the sanctuary below.  The skylight itself was not damaged, suggesting a deliberately destructive act, as one of the art glass panels must have been lifted up to drop the bucket through (and then replaced, unharmed).  Fortunately, the bucket remained sealed, so the sanctuary was not tarred, but the bucket took out one of the hanging, Wright-designed cube lights that grace the space. 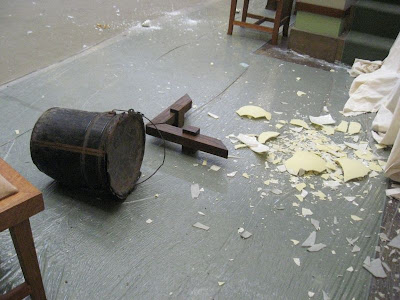 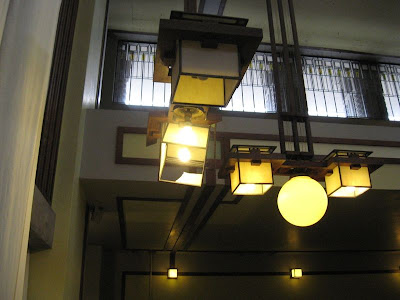 For some, this perplexing act of destruction brings to mind police investigations, insurance claims and increased security.  These are all important in the aftermath of such an incident, but what it brings to mind for me is:  education. In so many ways, a well-educated audience can be the best defense for a work of art or historic building.  Simply put:  people don't destroy what they understand, value and love.

Although there are no such documented high-profile cases of vandalism against the Martin House Complex, numerous anecdotes from long-time Buffalonians, many still living in the Parkside neighborhood, indicate that the property endured various minor acts of mischief during its "period of abandonment" (c. 1937-1954).  Pieces of floor tile, woodwork and other materials were pocketed as souvenirs (as they still are on occasion), fireplace tiles were smashed and some art glass may have been damaged.  But one can make a clear correlation between the rough treatment of the then-mysterious house and the general lack of public understanding and appreciation for Wright's great Buffalo buildings at the time - evidenced most dramatically by the 1950 demolition of the Larkin Administration building to make way for a parking lot.

The good news:  as understanding and appreciation for Wright's "Buffalo Venture" has grown in recent decades, the Martin House Complex is being meticulously re-assembled and restored.  Coincidence?  Hardly.  Human nature is to dismiss or even attack what we don't understand.  The groundswell of public and private support for the Martin House restoration can be traced back to education, whether by tours, publications, lectures or word of mouth.  Heightened awareness of the importance of these treasures of American architecture has translated into increased funding and more widespread and passionate advocacy.

Ironically, the rapacious art market, rather than ignorant vandals, may be more damaging to Wright buildings in the long run.  Donald Hoffmann makes this case compellingly in his article "Dismembering Frank Lloyd Wright" (Design Quarterly No. 155 (Spring, 1992).  Wright's works are dismantled much more comprehensively by collectors than they are by hurtling buckets or little boys wielding rocks.

There are various other revenge-based motivations for vandalism, and we may never know the motive for the Unity Temple attack; but I maintain that the most common "motive" for such acts is tenacious, old fashioned ignorance.
Posted by EJF at 11:29 AM