Another Accolade for Greatbatch 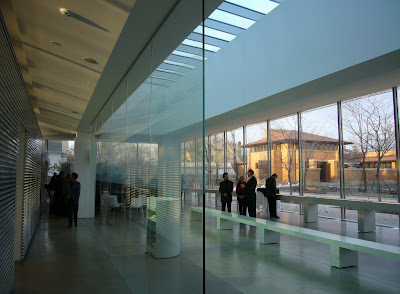 Adding to the laurels already bestowed on Toshiko Mori's Eleanor and Wilson Greatbatch Pavilion - awards from the Western New York Chapter of the AIA and the Structural Engineers Association of Illinois - the AIA New York Chapter has announced that the Pavilion is an Honor winner in its 2010 Design Awards.

Mori's design will share the limelight with other outstanding architectural projects at the chapter's upcoming Design Awards Luncheon and Exhibition at the New York Center for Architecture.  Among them are projects by Steven Holl Architects (Knut Hamsun Center,
Hamarøy, Norway), Morphosis Architects and Grunzen Samton (41 Cooper Square, New York) and Rafael Viñoly Architects (Carrasco International Airport New Terminal, Montevideo, Uruguay).  The honor bestowed on the Greatbatch Pavilion shines all the brighter in the midst of this highly distinguished roster of competitive and cutting-edge New York based designers.
Sharing the stage with projects in Europe, Asia and South America, the Greatbatch Pavilion is truly a world-class building.  And, believe it or not World, it's in Buffalo.
Posted by EJF at 10:39 AM