Burning Down the House 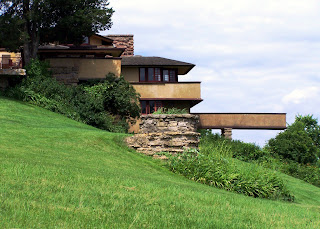 With the half-century anniversary of Frank Lloyd Wright's death and three recent books on the intrigues of his personal life (The Fellowship, Loving Frank and The Women), perhaps it was inevitable that a big-screen biopic would come next.  "Driving Ms. Daisy" director Bruce Beresford will shoot "Taliesin," from a screenplay by Nicholas Meyer.  The film will focus on - you guessed it - the lurid murders and conflagration at Taliesin (Spring Green, WI) in 1914.
While I'm happy to assume the film is innocent until proven guilty, I'm proactively skeptical about two things:  the casting of the figure of Wright (to be determined) and the movie's treatment of his architecture.  The former could easily make or break the production.  Who on Hollywood's A list (or any other letters of the alphabet, for that matter) could tackle the role?  It may be tempting to imagine a British actor for the role, but inappropriate given the inherent importance of the American identity to Wright's story.
The potential depiction of Wright's architecture is equally fraught with pitfalls.  I will be pleasantly surprised if Meyer manages to make the buildings characters in their own right, as I think they should be.  Wright  anthropomorphized Taliesin in such a way that a powerful opportunity may be missed if the structure is reduced to a lavish set.
So, I'll suppress my inner curmudgeonly critic for now and await the final product.