A WINDOW INTO THE COLLECTION


On Saturday, August 3, 2013, an art glass panel from the Martin House living room skylight—an object which had been held previously by an anonymous couple from suburban Buffalo—was sold at auction (Schultz Auctioneers of Clarence, New York, Lot 0411) for $80,000 to a local agent working on behalf of a private collector.  The bidding was fast and furious and, within minutes, it was clear that this rare and beautiful piece of Frank Lloyd Wright-designed iridescent glass—an emblem of the Martin House and its significance as a world, class architectural masterpiece—would not be returning home that day to its rightful place of origin. 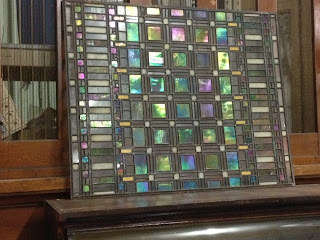 Marked by the symbolic banging of the gavel, the moment was undeniably poignant; looking back we realize that this auction, much like others that have come before it, neither signals the beginning nor the end of the Martin House story.  Rather, it is on such occasions, that we reflect on our achievements, both past and present, which in sum have led architectural authorities to call the Martin House one of the most ambitious and well-executed restoration efforts of its kind.

Now, more than ever, the Martin House confidently reaffirms the strength and soundness of its board-approved collections policy which clearly guides us through all aspects of the acquisition process.  Simply put, it is our goal whenever possible to identify, locate, and purchase authentic, original Martin House items if it is cost effective, affordable, and if donors are in a position to assist us.  With that said, our policy does not generally allow us to acquire art glass, furnishings, or other decorative elements at prices that exceed the actual cost of replication.  At times, this may result in our inability to successfully bid at auction; it also means, however, that as an organization we are unwilling to participate in the aggressive, over inflation of an object’s perceived market value, particularly if it precludes us from staying true to our core mission: to restore Frank Lloyd Wright's Martin House Complex and to preserve, interpret, and promote it well.

The Martin House is extremely grateful to its community of supporters—board, staff, volunteers, and affiliates, as well as private, corporate, and government funders—many of whom have voiced their concerns, offered their advice and counsel, and above all championed our ongoing restoration project.  We thank all of you profoundly.  We are especially proud and deeply appreciative of the Manning Family Foundation who in recent days came forward to assist us by committing a substantial, unrestricted donation on behalf of our art glass restoration efforts.  Donations in support of the restoration at large, or for art glass, in particular are always welcome.

In his seminal article, “Dismembering Frank Lloyd Wright,” author Donald Hoffmann writes one of the most compelling arguments against the commodification of Wright-designed objects.  “Architecture,” he reminds us, “seems the most substantial of the arts but proves one of the least enduring.”  In the case of Frank Lloyd Wright, “the dismemberment of his buildings, physically and intellectually, into mere fragments…represents nothing so much as a contradiction in terms, a violation of the whole spirit of his art, or its spirit as a whole.”

We remain encouraged that through continued communication and outreach we may ultimately identify and reunite other displaced original objects back where they belong—inside the Martin House.  By doing so, we hope that other public and private collectors will emerge and join the growing ranks of Martin House heroes—much like New York University’s Grey Art Gallery, the Albright-Knox Art Gallery, and individuals such as Nan and Will Clarkson, among others—who have each in their own way contributed to the enrichment of our collections and the project’s overall success.
Posted by Susana Tejada at 5:20 PM